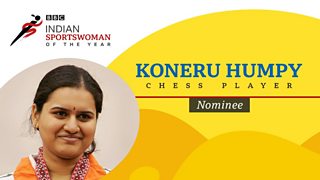 Koneru Humpy is one of the most talented Indians to grace the chess board.

The 33-year-old was identified as a chess prodigy at an early age by her father. She lived up to the reputation by becoming the youngest ever female grandmaster shortly after turning 15 in 2002.

The current women's World Rapid Chess champion and BBC Indian Sportswoman of the Year nominee says she savours her victories over male opponents more than those against woman.