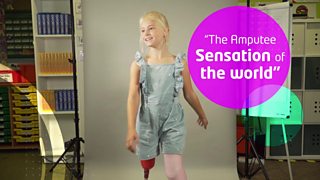 Daisy-May: The 'amputee sensation of the world!'

The nine-year-old double amputee has modelled at London and New York Fashion week, and is now hitting the heights in Paris!

She was born with a condition called fibular hemimelia, which meant that when she was 18-months-old, she had to have an operation where both her legs were amputated.

Now aged nine, and full of energy, Daisy became the first double amputee to model at New York Fashion Week and this week, will take part in a catwalk show at the top of the Eiffel Tower in Paris.

We went to meet her to chat about modelling, heights and not letting ANYTHING hold her back!