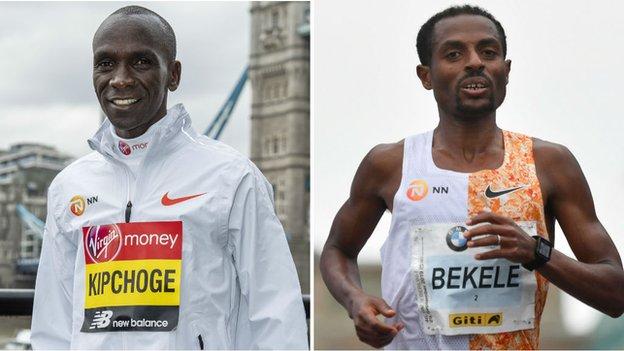 Ethiopian Bekele, 37, was only two seconds off Kipchoge's world record in Berlin in September.

"I am looking forward to racing against Eliud again. We have had many great battles over the years," said Bekele.

London Marathon event director Hugh Brasher called it "the head-to-head that the world is waiting to see".

Since turning to the road in 2014, Bekele's marathon career has been hindered by various injuries. But after coming so close to toppling Kipchoge's world record in the German capital last year, he says he is finally realising his potential over 26.2 miles.

"Everyone knows that I am a strong athlete, after 15 years on the track and when we come to marathon I have problems but this is not because of lack of personality," he said.

"Because of injury I was behind for some years. I am full of health and now I am doing a lot better."

Ethiopian duo Mosinet Geremew and Mule Wasihun have also been named in the field, meaning all three podium finishers from 2019 and four of the eight fastest men in history will race.

It has become almost impossible to argue against Kipchoge being the greatest marathon runner of all time.

The 35-year-old Kenyan has brought new glamour and attention to the distance, seizing the public's attention by breaking the two-hour barrier in a specially designed event in Vienna in October.

A team of rotating pacemakers, scooter-delivered sports drinks and various other aspects made that run ineligible for world-record status. No matter. Kipchoge had already made an astonishing jump forward in marathon running with his world-record win at Berlin 2018, lopping a minute and 18 seconds off the previous mark.

He has run 12 official marathons since turning to the road in 2013. He has won 11 of them, with a second-place finish behind compatriot Wilson Kipsang in Berlin in his debut year the only blemish on the record.

His victory over 26.2 miles at Rio 2016 secured the Olympic gold that had eluded him on the track.

Bekele turned to marathon after a dream career on the track and cross-country courses.

At just 21, he broke both the 5,000m and 10,000m world records in the space of nine days in 2004, before winning his first Olympic gold over the longer distance at Athens later that year.

He followed up that success with the 5,000m-10,000m double in Beijing four years later and also amassed five world track titles, in addition to 11 world cross-country gold medals. His world-record marks over 5,000m and 10,000m still stand today.

He won on his marathon debut in Paris in 2014 and has since claimed the Berlin title twice.

"I still can do this. I don't give up," he said after missing out on Kipchoge's world record of 2:01:39 by just two seconds, four months ago.

He also believes that he could match Kipchoge's sub-two hour run in Vienna given similarly favourable conditions.

"If someone like me also gets this chance we can do a similar thing or better. I believe in myself," he added.

Head-to-head tale of the tape

Kipchoge and Bekele are old adversaries.

According to statistics pulled together by Running Magazine, the pair have met 20 times across all surfaces and distances.

Bekele claimed notable wins over his rival in the Beijing 2008 5,000m final and at the World Championships the following year in Berlin. In total Bekele has come out on top in 11 of their 14 track meetings.

However the story changes as the distance does.

On the road, Kipchoge has dominated. The Kenyan has won all four of their marathon meetings, with Bekele unable to get within a minute of the perennial winner.

At their most-recent marathon meeting - in London in 2018 - Bekele was a distant sixth as Kipchoge ran a time that was the second-fastest for all time.

Both men will be wearing the Nike Vaporfly shoes that seem to have dramatically revised the possibilities for elite marathon runners.

It seems to work. A New York Times study of results from more than a million amateur races suggested runners were running between 4% and 5% faster than they would in an 'average'' running shoe.

At the elite end of things, the five fastest marathons of all time have been run in the last 16 months by athletes wearing varying forms of the Vaporfly technology.

World Athletics are considering the legality of the technology with their own regulations, stating that "shoes must not be constructed so as to give athletes any unfair assistance or advantage".

Bekele was not part of the pacemaking team that helped Kipchoge break the two-hour barrier in September and blamed his shoes for his uneven race in the 2017 London Marathon, claiming that they were causing blisters.

However his time in Berlin suggests they are now rubbing him up the right way. With their rivalry to drive them on, a record time for London's twisting course could be on the cards.