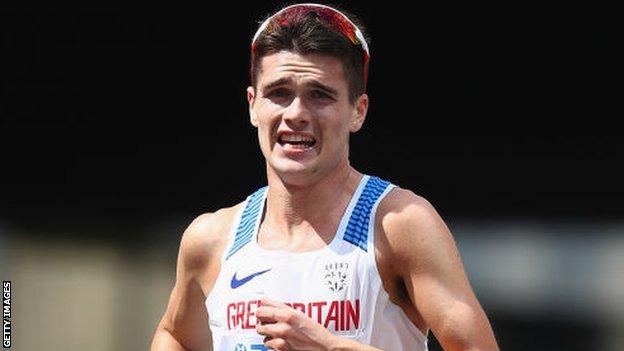 Scottish marathon star Callum Hawkins admits he may not even make the top 10 at the Tokyo Olympics next year.

However, the 27-year-old believes coming so close to a medal at the World Championships in Doha gives him hope he can challenge.

Hawkins has finished fourth at the past two world championships, and was seconds away from bronze last weekend.

"I'm a bit lost for words really with what everything that happened," Hawkins told BBC Scotland.

"It was the strongest I've ever felt at the end of a marathon. I'm quite pleased with that considering my build up - just before it I got hurt, I had three weeks out, a very minor hamstring strain.

"When it comes to the Olympics it'll be an even stronger field so it'll be a lot more difficult to even come fourth again, but I'll still go out and give my best and try and get a medal.

"It will be even tougher to make the top 10 at the Olympics - I think all the big guns will be out. It's exciting and fun."

Hawkins was speaking at the launch of next year's Stirling Scottish marathon, which will be run on Sunday October the 11th, a switch for the event from the spring to autumn.