Paralympic gold medallist Libby Clegg says she is on track for a quick return to athletics despite an emergency C-section as her first child was induced.

The 29-year-old Scot planned a spring birth to give herself a chance to be competitive for the World Championships in November.

Edward arrived in April and his mother is already back in training.

"I'm not sure whether I'll be quite where I was before, being realistic, but for me, having him has given me a new focus."

'I felt really numb after Rio'

Clegg, who secured double sprint success at the 2016 Paralympic Games, has a deteriorating eye condition and is registered blind.

"After Rio and reaching the pinnacle of my career and being incredibly successful and fulfilling my ultimate dream, it sadly didn't feel that great when I got home," she recalled.

"About a month after Rio, I had really bad mental health issues and I kind of just felt really numb and that I didn't really have a purpose in life any more and four years on to Tokyo seemed like a long way off."

Having taken time out of competition in 2017, Clegg's comeback was slowed by injuries to two guide runners. However, her determination to compete at the 2020 Tokyo Games meant that she kept training as long as she could before the birth.

"I think I ended up stopping running about 30 weeks and continued to do gym and bike sessions right up until 38 weeks pregnant," she said.

'He is my world. That totally changes priorities' 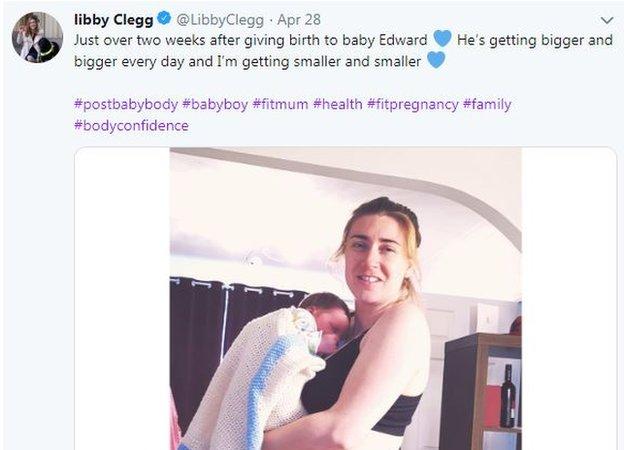 Clegg's plan of a home birth was ended by the complications resulting from Edward arriving two weeks late, but "bored of not running any more", she was soon "back into my normal routine and seeing my friends at the training track and my training partner because they are a key part of my life".

"I was desperate to get back on the track about two weeks after I had had him," she said.

Clegg revealed that fellow athletes have asked her about her experiences because there is a fear among many about what having a child will do to their bodies and their future competitiveness, as well as a "fear of being judged" for their decision.

She also admits that being blind and a mother produces extra challenges, revealing that: "Nappy changes are really interesting. I've got a little routine I do now to make sure I've got everything, but there's been a few times where he's just ended up in the bath because it's just been too messy."

However, she says it has been a "positive experience" and believes that the birth of her son has given an extra edge to her training regime.

"He is my world," Clegg added. "That totally changes your priorities in that sense.

"I want to put everything into my training. Every moment I'm away from him, I want to make sure it is worthwhile."