The Athletics Integrity Unit (AIU) has released details of 120 cases to protect the sport's "integrity and reputation" and for increased "transparency".

Some 85 of the cases involve Olympic and World Championships medallists.

In March, the Guardian reported that Jebet had tested positive for the blood booster EPO.

The 21-year-old, who was born in Kenya but competes for Bahrain, won the women's 3,000m steeplechase at the Rio 2016 Olympics and beat the event's existing world record by more than six seconds at the Paris Diamond League that year.

"The Athletics Integrity Unit believes that the transparency measures unveiled today signal best practice in sport and will help instil greater public confidence in the integrity of athletics and the operations of the AIU." 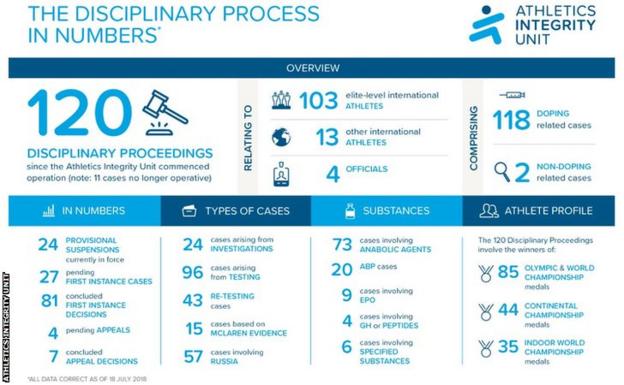 Two are not related to doping offences.

The AIU released details of 109 cases, with 11 no longer operational because suspensions have already been served.

Also on the list alongside Jebet is Kenyan long-distance runner Violah Jepchumba, who is fighting against a four-year ban for testing positive for EPO.

Jepchumba, 27, is the third fastest woman of all time over the half-marathon distance.

Agent Robert Wagner - who has previously represented world champion sprinter Justin Gatlin - is also being investigated after the Daily Telegraph said he had offered to "illicitly supply performance-enhancing drugs" to undercover reporters.

Kenyan three-time world champion Asbel Kiprop, who told the BBC he paid drugs testers because he "thought they wanted the money for fuel or tea", is also named.

In response to the AIU publishing case details, the Kenyan posted on social media: "Great efforts keep the sport clean favourable and transparent.

What is the AIU promising to do?

The independent AIU came into operation in April 2017, replacing world governing body the IAAF's former anti-doping department, and handles aspects relating to misconduct within the sport.

All 120 cases were investigated in the first 12 months of AIU operation.

From now on, the AIU will make public every stage of the process of dealing with a positive doping test, from the initial failing of a test and provisional suspension through to any punishments or sanctions imposed on athletes and their subsequent appeals.

Previously, the outcome of cases were only disclosed once proceedings were complete.

"We are only at the beginning of our mission to restore the reputation of athletics and there is a lot more work to be done," said Brett Clothier, head of the AIU.

"The current and recent caseload reflects the challenge we face as a sport, but also the fact we are willing to take on that challenge and drive cheats out of athletics."