The Queen will be the official starter for the 40,000 runners taking part in the 2018 London Marathon on 22 April.

Her Majesty, who turns 92 on 21 April, will start the annual 26.2-mile race from the grounds of Windsor Castle.

BBC Sport will relay coverage of the ceremony to the start in Blackheath, with the race finishing on The Mall.

Sir John Spurling, chairman of race organisers London Marathon Events said: "We are honoured that Her Majesty The Queen has accepted the invitation."

She will step on to a special podium in front of the Round Tower at Windsor Castle to push the start button at 10:00 BST.

It will be the third time a member of the royal family has started the race, which was first held in 1981. The first was Princess Diana in 1988.

Diana's sons Prince William and Prince Harry were joined by the Duchess of Cambridge to start last year's race.

This year's marathon, which will feature Britain's Mo Farah, takes place 110 years after the 1908 Olympic Marathon was started at Windsor Castle by the then Princess Mary, grandmother to the Queen.

The 1908 marathon, the showpiece finale of the Olympic Games, was the first marathon to be held over the classic 26.2 mile distance. 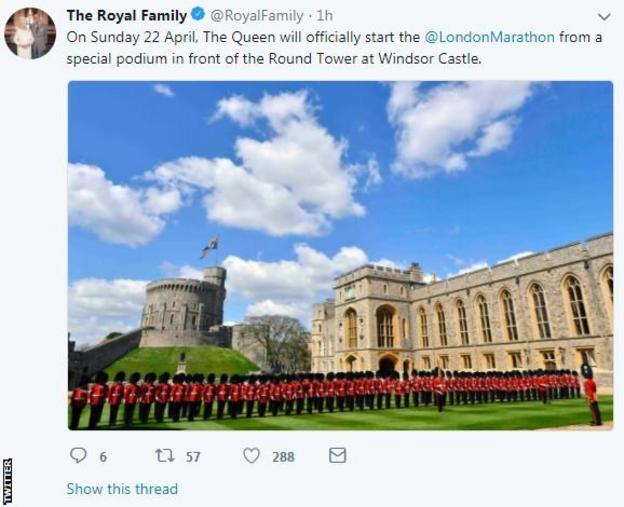