Britain's 4x400 metres women won a brilliant silver and the GB men bronze as the host nation finished the World Championships on a high.

Behind a superlative US performance for gold, the British quartet of Zoey Clark, Laviai Nielsen, Eilidh Doyle and Emily Diamond made it seven world medals in seven championships as they held off Poland.

A few minutes later Matthew Hudson-Smith, Dwayne Cowan, Rabah Yousif and Martyn Rooney ran a superb race to take the British medal tally to six, bang on the target set before the championships.

Earlier Laura Muir had finished outside the medals in the 5,000m but, as on Saturday night when the sprint teams landed gold and silver, the relay squads came storming to the rescue.

Only Mo Farah won an individual medal from the biggest team Britain has ever taken to a Worlds.

But the medal rush on this final weekend casts a different light on the squad's performance, its five fourth places also a promise of what might be to come.

British team skipper Doyle said: "If you look at the team as a whole, we've performed really well. We might have just made the medal target but sometimes that's irrelevant.

"Look at the bigger picture and I'm super proud of this team."

The US women's team of Quanera Hayes, Allyson Felix, Shakima Wimbley and individual 400m champion Phyllis Francis were dominant winners, their 3 minutes 19.02 seconds the fastest time in the world in five years.

Felix now has 11 world gold medals, the same as Usain Bolt, her leg once again the fastest as she and her team-mates almost made it two distinct races.

With reigning champions Jamaica failing to finish after injury struck on the second leg, there was an opening for one of the teams.

The British quartet took it in style, once again the bankers for a nation that has always relished relay success.

The US men's team had won gold at the last six Worlds, but this team lacks the stars of old and was overhauled by Trinidad and Tobago in the final few strides.

Behind them came bedlam as a capacity crowd roared home one last medal.

The British team had not been among the fastest qualifiers, yet inspired by 32-year-old Cowan on the second leg and a fine anchor leg from Rooney they came good when it mattered most.

Ethiopian Ayana had added world 10,000m gold to her Olympic title on the previous weekend and took the pace out hard after a slow first two laps.

Only Obiri, silver medallist in Rio last summer, could go with her as the pair ran the second kilometre in 2 minutes 28 seconds and threw in a 5 mins 40 secs two-kilometre section as the field splintered.

Ayana could not shake her shadow and with 300m to go Obiri exploded away for gold in 14 mins 34.86 secs, Ayana five and a half seconds adrift and the Netherlands' Sifan Hassan closing fast for bronze.

Sixth in 14:52.07 represents a worthy result for Muir in her first major 5,000m final, having also finished fourth in her preferred 1500m.

"Fourth and sixth, five races in 10 days, I think I can take so many positives from this," said Muir.

"I've showed I'm a contender in both events so I'm happy with that."

Her compatriot Eilish McColgan was 10th in 15:00.43, one of many unable to follow the extraordinary pace of the front two.

Obiri covered the last kilometre in 2 mins 45 seconds and the last lap in just 60 seconds, a remarkable display of distance running dominance.

Francine Niyonsaba of Burindi took silver and Ajee Wilson bronze for the United States, both blown away by Semenya's astonishing acceleration in the final 50 metres.

Kenya added a one-two in the men's 1500m as Elijah Manangoi held off Timothy Cheruiyot as world champion Asbel Kiprop faded into the also rans.

Norway's European champion Filip Ingebrigtsen held off Spain's Adel Mechaal for bronze, as Britain's Chris O'Hare finished a disappointing 12th and last after paying for trying to go with the early pace.

Great Britain's Robbie Grabarz, who won bronze at the 2012 Olympics, finished sixth after failing to jump 2.29m - the height he cleared for third in London.

Barshim told BBC Sport: "London is a special place for me. It's where I had my first Olympic medal and the crowd was amazing. I really wanted it.

"I love the pressure. That's when I perform the best. I expect from myself much more than everybody. It's motivation."

I am not British so I can say with no bias that this championships have been amazing.

You won't see crowds like this in Doha, and you wouldn't see this anywhere in the United States.

There is not the appetite for this sport anywhere else in the world.

The sport should say to London - thank you very much indeed. You have given us a fantastic occasion here and it was the best ever. 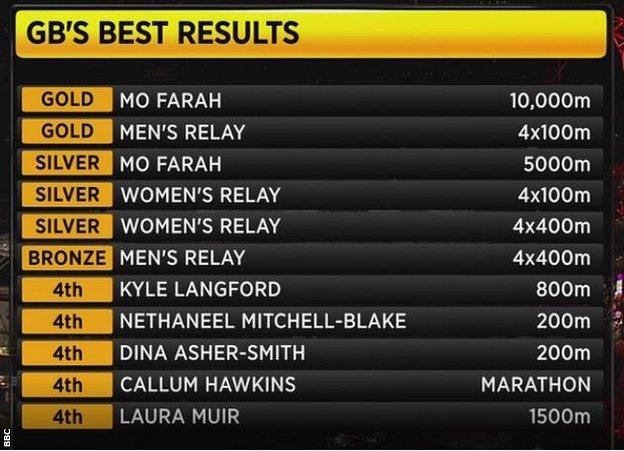