South African Van Niekerk had been hunting the first 200m-400m double since Michael Johnson 22 years ago, while Makwala of Botswana had run a solo time trial to get this far after his initial controversial exclusion on medical grounds.

But the 27-year-old Guliyev, who switched allegiance from his native Azerbaijan in 2011, held off Van Niekerk (20.11 seconds) and Trinidad and Tobago's Jereem Richards (20.11) to win Turkey's first gold medal at a World Championships in 20.09 and pull off another upset at an unpredictable London 2017.

"This is not a shock," said the champion. "But it does not feel real.

"I have shown my best throughout this competition. I delivered my best race at the right time. I'm so happy to be world champion. This is the best moment of my career."

Nethaneel Mitchell-Blake was 0.13 seconds off bronze in fourth, another close miss for Britain to go with the fourth places for Laura Muir in the 1500m, Kyle Langford in the 800m and Callum Hawkins in the marathon.

Mitchell-Blake told BBC Sport: "I am glad to come through healthy. I feel like I have let the nation down today. I know I had the calibre to get a medal. I wanted to win. That's all I thought about when I go out there."

It has been a week where many of the big names have struggled, but one of the sport's great champions, double Olympic and world triple jump gold medallist Christian Taylor, once again excelled on the biggest stage as he held off fellow American Will Claye in a thrilling, seesaw final.

No fairytale finish for Makwala

Makwala had become the folk hero of London 2017 having been excluded from both the 400m and 200m heats when the IAAF medical commission placed him in 48-hour quarantine after deciding he showed symptoms of norovirus.

He then got through a time trial in sodden conditions on Wednesday evening to make the semi-finals, getting through those despite having only two hours recovery.

There are many people who don't think I deserve this

But those efforts may have taken their toll in the least preferred of his two events, and he tired down the home straight to finish sixth in 20.44, his slowest time all week.

"I thought I could get a medal, but I ran yesterday two difficult races and it wasn't easy.

"I will leave the championships with my heart broken."

Van Niekerk too looked weary in his sixth race in six days, and only held off Richards in bronze by one thousandth of a second.

This was Guliyev's night, and he celebrated with both Turkish and Azerbaijani flags in his hands.

"It was a tough week," said Van Niekerk, who was in tears during his interview with BBC Sport.

"I really feel I worked hard for tonight and I gave it my all. I have proven over and over I deserve what I have achieved.

"It's been a tough week. There are many people who don't think I deserve this.

"I work just as hard as every other competitor. I don't think I got the respect I deserved after the 400m - but it's only the beginning and I will show my dominance."

Taylor's triumph may not have surprised the bookmakers and he still has Briton Jonathan Edwards' world record to beat despite all those titles.

But he was pushed all the way by Claye in a fine competition, the latter jumping 17.54m in the first round before Taylor passed him with 17.57 in the second round.

Claye then retook the lead in the third round with 17.65, only for Taylor to better it by three centimetres with the very next jump.

These have been a testing championships for the host nation, the solitary medal a week in coming from Mo Farah in the 10,000m on the opening night.

But Dina Asher-Smith is into Friday's 200m final after running a season's best of 22.73 to finish second behind Ivorian Marie-Josee Ta Lou in her semi-final, Dafne Schippers of the Netherlands and Bahamian Shaunae Miller-Uibo looking dangerous as they dominated their semis.

"I'm absolutely over the moon, especially after the year that I've had," said Asher-Smith, who fractured her foot in February.

Eilish McColgan ran a personal best of 15 minutes 0.38 seconds to make the 5,000m final, and she will be joined by fellow Scot Muir, who squeaked through as a fastest qualifier despite ending the heat in obvious physical distress.

"I felt good out there apart from that last lap," said Muir. "I know I'm better than I ran today and hopefully I can show it in the final."

McColgan is now less than a second off the career best of her mother Liz, who was 10,000m world champion in Tokyo in 1991.

Katarina Johnson-Thompson remains in the hunt for a high jump medal to make up for the disappointment of missing out in the heptathlon after both she and Morgan Lake made it through their qualifying pools with clearances at 1.92m.

Chris O'Hare and Jake Wightman qualified well for the 1500m semi-finals, with all three British women in the 800m - Lynsey Sharp, Shelayna Oskan-Clarke and Adelle Tracey - into the semis, Tracey impressing with a new personal best of 2.00.28.

'These were slow times' 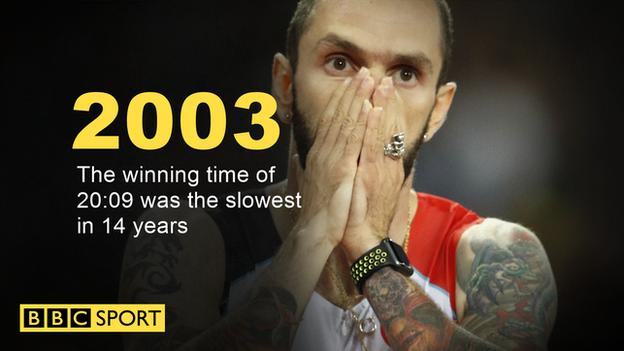 The times were not very impressive so the standard of the 200m has gone down a little bit. With Usain Bolt, Justin Gatlin and Andre de Grasse out it created a close race.

Makwala looked like he had a great start and then the fatigue set in.

Van Niekerk found something between yesterday and today to be able to take that silver medal.

Mitchell-Blake has had a long season in the American collegiate system so that is a great result for him.