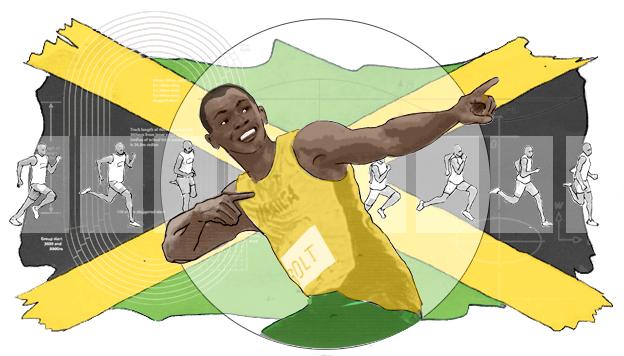 Usain Bolt is widely acknowledged as the greatest sprinter of all time.

As the Jamaican prepares to retire after the World Championships in London, here are 9.58 reasons why he deserves to be called a legend, and how he achieved it.

He is the fastest runner in history. Bolt has set the past three world records at 100m, and it is nine years since he first broke it.

Bolt beat compatriot Asafa Powell's record of 9.74 seconds by clocking 9.72 in May 2008, then lowered it to 9.69 at the Beijing Olympics later that year.

At the 2009 World Championships in Berlin, he shaved more than a tenth of a second off his record, clocking 9.58 seconds.

Back in 1912, American Donald Lippincott ran 10.6 seconds in Stockholm to set the first time recognised by the sport's newly founded governing body, the IAAF.

Jim Hines, in 1968, was the first man to officially dip under 10 seconds, but it took almost a century for Lippincott's time to be bettered by a whole second - courtesy of Bolt.

He has run faster, more often. The IAAF's pre-London list of all 100m runs under 10 seconds shows just a handful of rivals come close to Bolt's times.

Since Hines, another 124 men have beaten the 10-second mark.

But no-one except Bolt, fellow Jamaicans Yohan Blake and Asafa Powell, and Americans Justin Gatlin and Tyson Gay (highlighted on the chart) have run under 9.78 seconds.

Bolt himself has managed that an astounding nine times in total - more than anyone else.

And of course, it's not all just about the 100m. Bolt excels in the 200m and is the only man to hold world records in both distances since the IAAF began utilising automatic timekeeping in 1977. 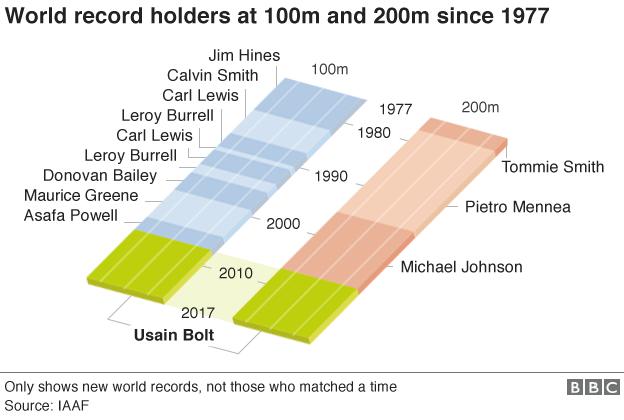 He is incredibly consistent. London 2017 aside, Bolt has won virtually every Olympic and World Championship race he has entered from 2008 onwards.

Rio 2016 saw him complete an unprecedented "triple triple" of consecutive Olympic gold medals in 100m, 200m and 4x100m relay - making him "immortal", in his own words. 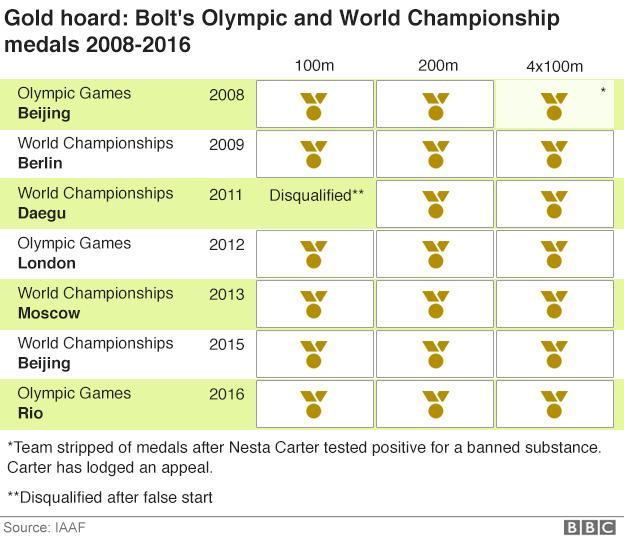 Bolt has since lost the 2008 relay medal after team-mate Nesta Carter failed a retrospective drugs test - affecting the whole relay team. Carter has lodged an appeal with the Court of Arbitration for Sport.

Bolt's World Championships career is blotted only by a bronze medal in London in 2017, and a false start in the 100m in Daegu, South Korea, in 2011 which meant an automatic disqualification. 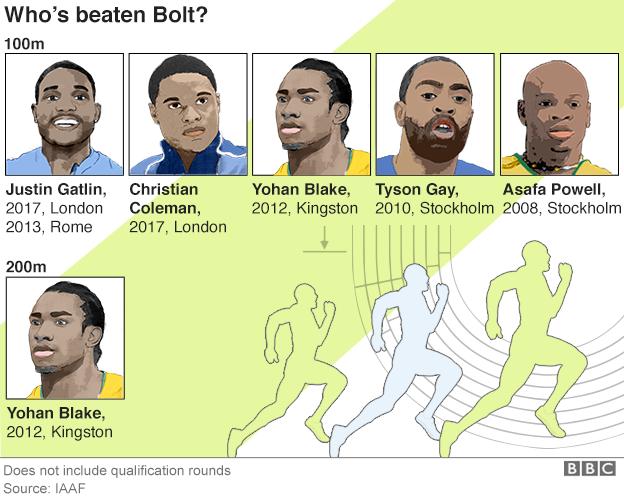 From 2008 onwards, he has only ever been beaten once in the 200m - by compatriot Blake at the Jamaican National Championships in 2012.

Blake also won the 100m at the same meet, one of only five times Bolt has failed to win at that distance in a major event.

Gatlin, Christian Coleman, Powell and Gay are the other athletes to have beaten Bolt in the 100m. 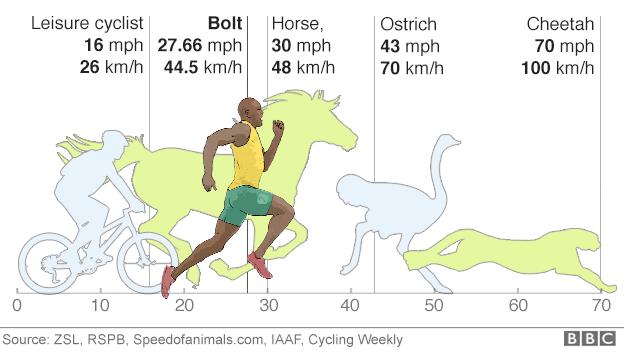 How does he do it? There is no simple answer but a study by Mackala Krzysztof and Antti Mero, published in the Journal of Human Kinetics, found his 6ft 5in (195cm) frame is one factor that gives him an advantage over other competitors. 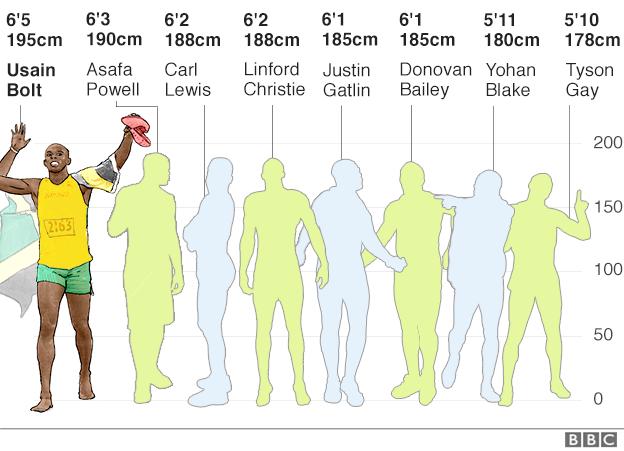 Being tall is often regarded as a disadvantage for sprinters at the start of a race as it can limit the drive phase, when runners push forwards at an angle to gain acceleration.

But, the researchers say, by midway "Bolt's body height resulting in long strides makes it possible for him to maintain high speed for a longer time and decelerate at a slower rate than shorter sprinters".

And that stride length can average 2.47m. That's a full 20cm longer than that of most other competitors - but he maintains a high stride frequency.

It's a devastating combination for his rivals, as once Bolt is in full flight, he can gain ground with every step.

The Jamaican covered his world record 100m in less than 41 strides, whereas the other finalists averaged almost 45, Krzysztof and Mero found.

So what about that slow start for tall sprinters? Bolt overcomes it - usually.

True, he is slower out of the blocks than other competitors: if you look at all his reaction times out of the blocks across his Olympic and World Championship 100m races (except for his false start at Daegu 2011), pre-London he averaged 0.158 seconds while the other finalists averaged 0.149 seconds. 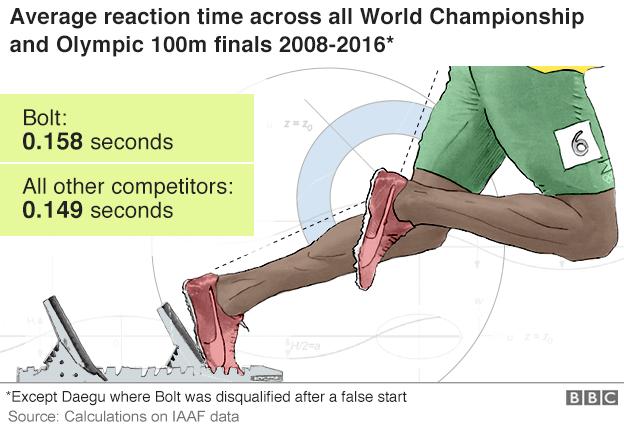 But, according to Michael Johnson, in his best races Bolt manages to achieve a similar drive phase as less tall runners. "You will see that in the first 30m or so he's right there with the shorter sprinters, which is rare," Johnson told the Olympic Channel.

In his world record race, Bolt was the quickest throughout. He was already ahead by 20m and fastest over every subsequent 20m section.

With Bolt, there is always more besides the running. From his 'Lightning Bolt' pose, to goofing around on the track, to his claim he ate "about 1,000" chicken nuggets at the Beijing Olympics, Bolt's playful personality has brought superstar status.

Occasional criticism for "showboating" before crossing the line has done little to dent his reputation with fans.

On the eve of his retirement, he is one of the world's most popular track athletes on social media with a following of almost 19 million on Facebook, 7.1 million on Instagram and 4.75 million on Twitter. 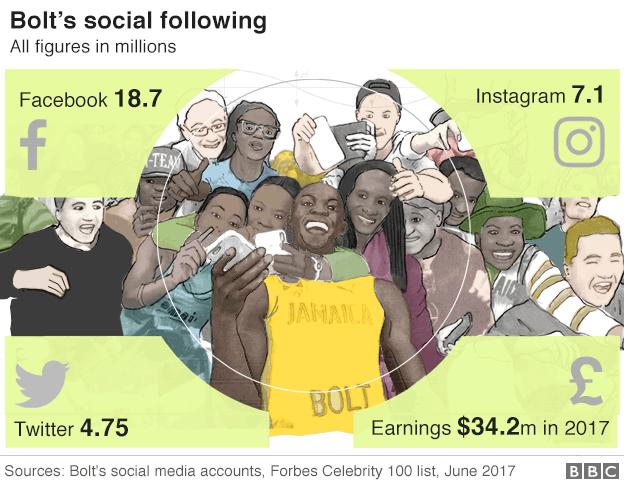 With the fame comes the sponsorship. Contracts with Puma, Mumm champagne, Advil and others brought his annual earnings to $34.2m (£26.2) in 2016-17, according to Forbes magazine, which put him at 88 in its celebrity 100 list.

Bolt donates to charity through his foundation, including many years' support for his old high school in Trelawny Parish, Jamaica.

But will he now step off the world stage into the shadows? The man himself says he wants to "relax a little bit, enjoy myself as much as possible".

And, after that, perhaps a continuing role in global athletics.

But there is no doubt that the sport will miss him. IAAF president Lord Coe told the BBC recently: "What we will miss is the personality. We do want athletes with personality."

There's no chart that can capture that.