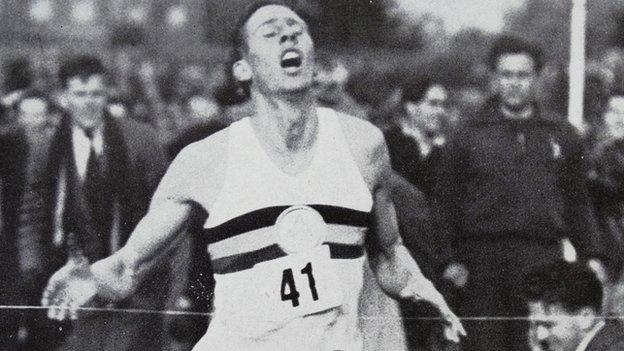 When Sir Roger Bannister ran one mile in under four minutes on 6 May 1954 it was hailed as a ground-breaking moment for sport.

His time of three minutes 59.4 seconds broke both psychological and physiological barriers.

Now, 63 years later, an attempt will be made to shatter another of sport's landmark times - a sub two-hour marathon.

Bannister's mile was a triumph of Corinthian values and spirit.

However, this marathon - to be run in under 120 minutes - is organised by sportswear giant Nike and the event, taking place in northern Italy on Saturday morning, has a distinctly corporate feel about it.

It is the ultimate endurance test, but also one which no fans or broadcast journalists will be able to see.

So is it an expensive PR and marketing exercise?

Or, given its aim to knock close to three minutes off the best time anyone has ever ran 26.2 miles, should it be viewed as a laudable attempt to use sporting excellence and science to push human endurance to dizzying new heights?

A place in history, but not the record books

The world record for the marathon was set by Kenya's Dennis Kimetto in Berlin in 2014. His time of two hours two minutes 57 seconds is the closest anyone has ever come to going under two hours.

However, it will be not be Kimetto stepping up to this challenge. The job lies instead with his compatriot Eliud Kipchoge, Zersenay Tadese of Eritrea and Lelisa Desisa of Ethiopia.

Kipchoge, as the reigning Olympic marathon champion, perhaps has the greatest chance. His personal best of 2:03.05, set in London in 2016, is impressive and just eight seconds shy of the record.

To break the two-hour marathon barrier, a runner would need to beat the fastest-ever marathon by about 3%. That means they would need to shave seven seconds off each of the race's 26.2 miles.

Therefore, to go under two hours will require a substantial improvement - something that several sports scientists believe is simply beyond what is currently humanly possible.

They have signed up the three elite performers, paying them to forego the London and Berlin marathons this season so they can focus their full attention on what the company has branded "Breaking2".

Historical weather patterns have been studied and a three-day window chosen in the belief it will offer optimum conditions.

It has since been narrowed further and so, at 05:45 local time on Saturday morning, the three men will set off in pursuit of a place in history, but not the record books.

This is because of the use of in-out pacemakers, 20 of which will be deployed to keep the pace at a necessary level. Their use is against athletics regulations, so no matter what time is set on Saturday morning, it won't be considered a valid world record.

The pacers will also work in formations to defend the three runners from head or crosswinds.

How are they trying to do this?

In-out pacemaking is just one facet of what is a complex and expensive operation.

According to Runners World magazine, several locations were scouted worldwide in search of the perfect venue.

Courses in the Netherlands, Chicago and Berlin are all said to have been considered and eventually rejected.

Monza, just north of Milan, is more used to hosting Formula 1 races but was finally chosen because of its gentle corners, climatic conditions and the fact it's both flat and 600ft above sea level. So 17.5 laps of a 2,400m course await.

Nike's legion of scientists, performance coaches, nutritionists and medical staff are also leaving nothing to chance. Mobile ultrasound units have been used to measure glycogen levels in the runners' legs, core temperature pills (an ingestible thermometer that transmits data) are taken by the runners and the latest advances in recovery methods are in use to provide every possible chance of success.

Staff on scooters will deliver energy drinks to the three runners to ensure they don't waste vital seconds slowing down or even slightly veering off course to grab them from roadside tables.

And then there's the runners' kit - or, more specifically, the shoes.

Nike says its own tests on a special new shoe - passed as legal by the International Association of Athletic's Federation's (IAAF) technical committee - make runners up to 4% more efficient.

'Transform a sport' - the marketing

So is the attempt just about selling very expensive shoes?

Nike's big corporate rival, Adidas, is planning its own sub two-hour marathon attempt but wants to do so in a race setting; perhaps laying claim by so doing to a greater sense of authenticity.

But Nike's vice president of special projects, Sandy Bodecker, is perhaps unsurprisingly enthusiastic about the impact that going under two hours will have, even if it is under such controlled conditions.

"The sub two-hour marathon barrier is one of those rare ones that, if broken, can transform a sport," he says.

"It's the last big, once-in-a-generation barrier… It will impact the way runners view distance running and human potential forever."

It's a big claim but, very much in line with a company ethos that urges elite athletes and park plodders alike to "Just Do It."

Others, however, are critical of the attempt given the money-no-object resources that have been thrown at it and the fact it will not count as a legitimate record.

Is media presence a distraction?

The attempt is also notable in that the world's media are being blocked from witnessing it. This is very much a behind-closed-doors event, which is unusual given the corporate fanfare it is accompanied by.

There will be no fans lining the steep grandstands that are usually filled by thousands of Formula 1 tifosi on race days.

It suggests that, with everything else under tight control, spectators and journalists would be a distraction from the task at hand. The very early start time, no doubt, presents logistical issues too.

Instead, Nike have allowed a few hand-picked journalists to attend who have also covered the build-up to the big day. A web stream will also provide coverage of the runners on the asphalt track.

Some supporters of the project have called it a "moonshot", given the scale of ambition and the effort expended to get to this point.

So, just like Neil Armstrong's famous first step on the lunar surface in 1969, the world will be required to watch and wonder.

Analysis - the man, not the shoes

Amid the furore over proposals to not call anything pre-2005 a world record, there's some irony that we can get so excited about a race where a world record can't be set.

Saturday 6 May is the preferred date, which is also the 63rd anniversary of Roger Bannister breaking the four-minute barrier for the mile.

There are definite parallels. There was plenty of controversy about Bannister's attempt, just as there is about what's happening in Monza.

But an athlete racing against the clock goes to the heart of what the sport has always been. If anyone can do this, it's Eliud Kipchoge.

But that still means him running more than three minutes faster than his current best. The man, not the shoes nor the science, will have to find most of that.