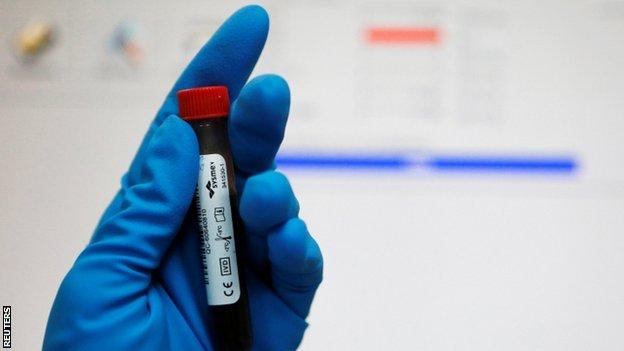 The medics were secretly filmed by the Sunday Times, which has investigated allegations of doping in the African country in collaboration with German broadcaster ARD/WRD.

Kenya's Directorate of Criminal Investigations (DCI) has also reportedly made arrests in connection with the claims.

Ukad has also sent two investigators to Nairobi to assist with the enquiries.

In a statement, UK Athletics described the Sunday Times' allegations as "vague and unsubstantiated" and encouraged the newspaper to "provide full details of all of the individuals and information in its article as a matter of urgency so that the claims can be investigated in a timely manner".

It added: "None of the allegations as presented relating to British athletes accords with our experience. Nevertheless, we take any allegations of doping seriously and will as always cooperate fully with any investigation undertaken by Ukad or other anti-doping organisations."

It is alleged that the footage shows the medics claiming they were paid by British, Kenyan and other athletes to administer blood-boosting drug erythropoietin (EPO).

According to the newspaper, the doctors provided medical notes and blood test results to show they had treated a British athlete for an injury.

A third Kenyan associated with the doctors also alleges that three other British athletes were among the 50 athletes he had given banned performance-enhancing drugs to.

The Sunday Times says that when it subsequently approached the two doctors, they refused to answer questions about the claims they had made on film. It says the associate claimed he had lied about helping athletes cheat - and had encouraged the doctors to lie as well "to make some money".

Nicole Sapstead, Ukad chief executive, said the evidence was "of grave concern and of significant interest".

She added: "We have opened an investigation and are taking the necessary steps to corroborate the evidence and investigate it further...this evidence is being treated with the utmost importance and urgency."

Kenya, a powerhouse nation in world athletics, was deemed to be in breach of global anti-doping rules in May. The World Anti-Doping Agency declared the country non-compliant with its code after a series of drugs and corruption scandals.

These allegations come weeks after Kenya passed legislation to create a new national anti-doping agency in April. The IOC has since demanded that Kenyan athletes who want to compete in Rio must undergo extra doping tests.

Last month, the chairman of Ukad admitted mistakes had been made over its handling of allegations that a London-based doctor prescribed performance-enhancing drugs to 150 athletes, including Premier League footballers.

Ukad investigated Mark Bonar - who denies any wrongdoing - two years ago, but decided he was out of their jurisdiction and did not pass on any details to the General Medical Council. The findings of an independent review into the affair is due to be published later this month.

Sapstead said: "We recognise that many athletes train overseas for a number of reasons, such as warmer weather or the altitude, and sometimes in countries which do not have the necessary anti-doping systems in place.

"Ukad has no power to prevent a sport training in other parts of the world and we strongly encourage every sport to carry out a risk assessment when choosing where their athletes train and to report any concerns to us.

"Whilst ultimately it is an athlete's responsibility to protect themselves from doping, it is absolutely imperative that national governing bodies of sport ensure that their athletes and coaching staff are safeguarded and are training in safe and clean environments.

"They must ensure that they are in the best possible environment to compete, and win, clean."