Six-time Olympic gold medalist Usain Bolt has suffered an injury scare ahead of Rio after tearing a hamstring at Jamaica's Olympic trials.

Bolt, 29, sustained the grade-one tear during the first round of the 100m and withdrew after winning his semi-final.

He is still expected to defend his 100 and 200m titles as Jamaica's selection policy allows medical exemptions.

Bolt "will seek treatment immediately" and is aiming to return for the London Anniversary Games on July 22.

In the double world champion's absence, the 100m final in Kingston was won by London 2012 silver medallist Yohan Blake in a time of 9.95 seconds. 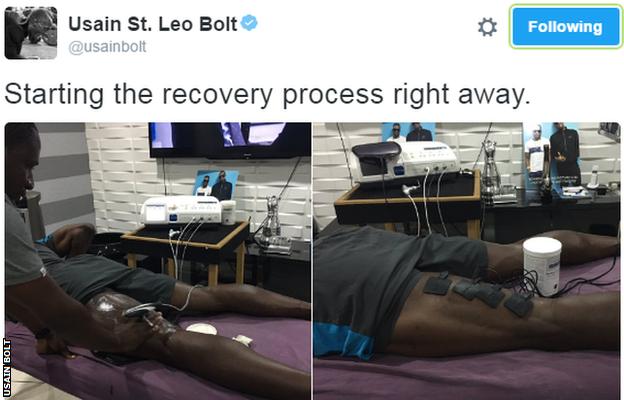 Meanwhile, Sanya Richards-Ross will not defend her 400m title in Rio after pulling out of the US Olympic trials in Eugene, Oregon.

The 31-year-old, who will retire at the end of the season, dropped out after 250m of her heat with a hamstring injury

"I've had an amazing career," the three-time Olympian said. "No Rio. That's the toughest part. No matter how banged up you are you still think it's possible."