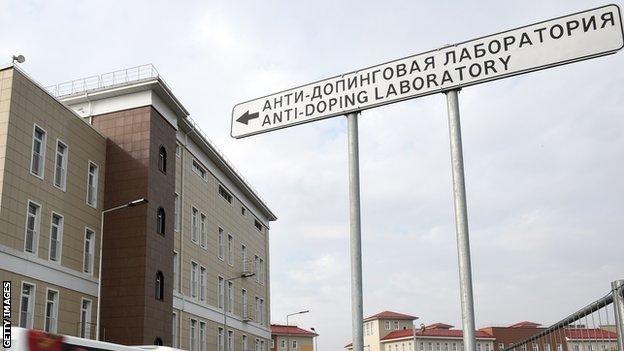 A whistleblower has alleged undercover Russian intelligence agents posed as anti-doping staff to cover up cheating at the Sochi 2014 Winter Olympics.

He said he was told of a cover-up by Grigory Rodchenkov, the former head of Moscow's anti-doping laboratory.

Russia's sports ministry said it was "certain about transparency of doping control" in Sochi.

Rodchenkov was not interviewed by the programme, which was broadcast on Sunday, but 60 Minutes journalists said they had listened to recordings of him speaking to Stepanov.

The BBC has been unable to independently verify the allegations made in the programme.

Stepanov said Rodchenkov told him that agents from Russia's security service, the FSB, "worked as doping controls officers during the Sochi Games" and "tried to control every single step of the anti-doping process in Sochi".

He further claimed he had been told four Russian gold medallists at the Games were using steroids.

The World Anti-doping Agency (Wada) has said it will investigate the new allegations.

Russian athletes have already been banned from international competition by the sport's world governing body, the International Association of Athletics Federations (IAAF), after a Wada commission report alleged "state-sponsored" doping in the country.

The same report said Rodchenkov was complicit, asking for and accepting bribes and destroying blood and urine samples. He later resigned from his role as head of the Moscow lab.

Stepanov and his wife, banned athlete Yuliya Stepanova, were the main whistleblowers in a series of German television documentaries in 2014 which alleged "99%" of Russian athletes were doping. Those claims led to the Wada independent commission being set up.

The IAAF is meeting next month to assess whether Russia has done enough to tackle its doping culture before being allowed to take part in August's Olympic Games in Rio.

A spokesman for the Russian sports ministry said a full investigation had been carried out into "all relevant parties" since Stepanov's original allegations and it had agreed a 'road map' with Wada to "guarantee the independence and transparency of the doping control in Russia".

It added: "We are also certain about transparency of doping control during the 2014 Olympic Games. In addition to Russian specialists, the labs and doping control stations in Sochi had foreign experts.

"Furthermore, a team of independent observers managed the doping control operations on daily basis during the Games."