The 30-year-old beat Australian Kurt Fearnley and six-time London winner Weir in a sprint finish on The Mall.

Paralympic gold medallist McFadden, also the Boston champion, was pushed all the way by runner-up Manuela Schar of Switzerland, who finished one second behind. Wakako Tsuchida of Japan was third.

"Each year it's going to get tougher and tougher with athletes getting faster," McFadden told BBC Radio 5 live.

"I was a little nervous towards the end but I found the will and the drive within."

Britain's Shelly Woods retired for a second consecutive year with a puncture.

The event doubles as the IPC Athletics Marathon World Cup, and is the second race in the Abbott World Marathon Majors series.

Weir first won the London Marathon in 2002, adding five more titles over a 10-year period to share the record with Baroness Tanni Grey-Thompson with six victories.

Six-time Paralympic champion Weir - nicknamed the 'Weirwolf' - finished second on home soil in 2014 and 2015 and was beaten into third on Sunday in a thrilling finish.

Think you can't run? Surprise yourself!

Choose which celebrity you'd like help from in the new Couch to 5K programme, designed for people who have done little or no running.

Hug, who suffered a puncture in last year's race, led a five-man pack into the final turn and maintained his position, with Fearnley one second behind and Weir a further second back.

"This is my 16th year in a row, I think. To get six victories and be in the top three a number of years is not bad going. I've got to applaud myself for that and not get beaten up about the seven.

"If it comes, it comes and if it doesn't, it doesn't. I'm happy with what I've done in my career, but I'm not saying I'm going to retire.

"I still feel I have more to give and I'll be back next year." 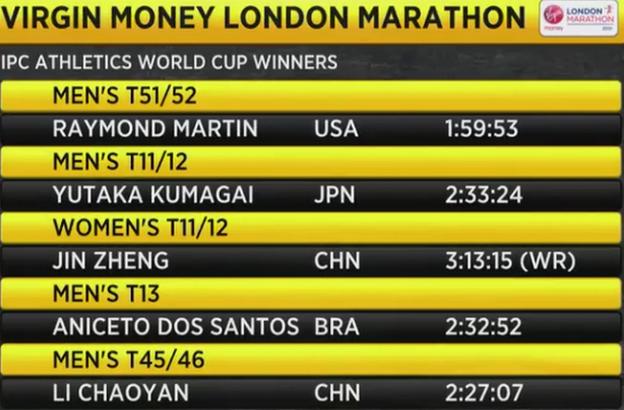