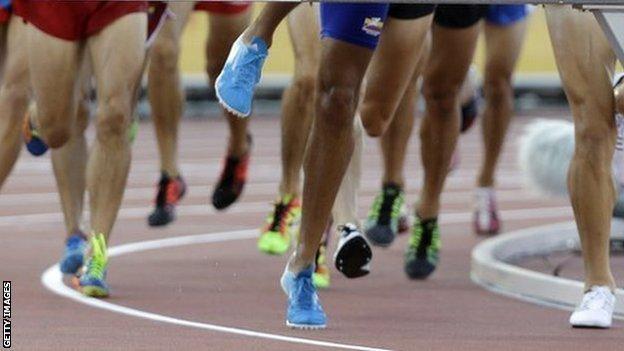 The World Anti-Doping Agency (Wada) says it is "very alarmed" after fresh allegations of suspected doping emerged in a leak of test data.

The Sunday Times and German broadcaster ARD/WDR have obtained access to the results of 12,000 blood tests from 5,000 athletes between 2001 and 2012.

According to the newspaper, the evidence - which has been seen by the BBC - reveals the "extraordinary extent of cheating" by athletes at the world's biggest events.

Wada's independent commission will investigate the claims in the ARD/WDR documentary Doping - Top Secret: The Shadowy World of Athletics.

Wada president Sir Craig Reedie said his organisation was "very disturbed by these new allegations... which will, once again, shake the foundation of clean athletes worldwide".

The files belong to world governing body the International Association of Athletics Federations (IAAF), but have been leaked by a whistle-blower.

In a statement, the IAAF said the data had been obtained "without consent" and that it reserved the right to take any follow up action necessary.

The Sunday Times and ARD/WDR used two of the world's "foremost anti-doping experts", scientists Robin Parisotto and Michael Ashenden, to review the data.

According to the experts, the database reveals:

Parisotto said: "Never have I seen such an alarmingly abnormal set of blood values. So many athletes appear to have doped with impunity, and it is damning that the IAAF appears to have idly sat by and let this happen."

According to Ashenden, the files show that athletics is now in the same "diabolical position" as cycling during the Lance Armstrong era. He said it was "a shameful betrayal of [the IAAF's] primary duty to police their sport and to protect clean athletes".

The evidence is not proof of doping - but the revelations will raise more serious questions over whether the sport is doing enough to combat cheating ahead of the World Athletics Championships in Beijing later this month.

In its statement the IAAF, which the Sunday Times reported had on Friday dropped a planned injunction against publication of the story, added it was "aware of serious allegations made against the integrity and competence of its anti-doping programme".

It said the allegations "are largely based on analysis of an IAAF database of private and confidential medical data which has been obtained without consent".

"The IAAF is now preparing a detailed response to both media outlets and will reserve the right to take any follow-up action necessary to protect the rights of the IAAF and its athletes."

The federation is due to elect a new president in just over two weeks, with Britain's Lord Coe the favourite to win the election against IAAF vice-president Sergey Bubka. Coe has made independent testing a key part of his manifesto.

Former Olympic pole vault champion Bubka told the BBC: "We will not stop the fight. We know that in the 21st century doping is the biggest danger and there will be zero tolerance. If we need to strengthen our rules and regulations we will do it."

The IAAF said that before the introduction in 2009 of the biological passport - which monitors longitudinal blood values - its testers had "systematically pursued" all results that were deemed "atypical" with immediate urine tests for EPO and then target-tested those athletes in and out of competition.

Since the introduction of the passport, the IAAF says it has "pursued more cases under the passport system than all other anti-doping organisations together", and is spending $2m a year on combating cheating. "As a percentage of overall annual budget this is the highest of any sport," it added.

There can be various reasons for abnormal blood samples other than performance-enhancing drugs. Illness, altitude training and pregnancy can all influence values.

The latest claims come after a turbulent few months for athletics.

In December, ARD/WDR alleged systematic doping in Russian athletics and implicated the IAAF in covering up the problem. The Russian Athletics Federation called the allegations lies, and IAAF president Lamine Diack denied any collusion, although he did admit to the BBC that his sport was "in crisis". Both the IAAF and Wada are investigating the allegations.

The German documentary-makers also claimed an unnamed member of the IAAF medical commission had a list of 150 suspicious blood samples from 2001 to 2008 that were not investigated. Diack described this as "ridiculous".

The IAAF insisted that the whistle-blower would not have known if follow-up tests had been conducted and pointed out that its athlete biological passport scheme was only launched in 2009 and samples before that date did "not have the same level of reliability and strength as the post-2009 values which were collected under strict and stringent conditions".

In June, the BBC's Panorama programme alleged that Mo Farah's coach Alberto Salazar violated various anti-doping rules with other athletes. He denies the allegations, and there is no suggestion that double Olympic champion Farah was guilty of any wrongdoing. UK Anti-Doping and the US Anti-Doping Agency are investigating the claims.

Although it was one of the first sports to introduce the biological passport, athletics has a chequered history of drug scandals, from East Germany's years of state-sponsored doping through to the Balco affair in 2002.

These latest claims could lead to renewed calls for countries to be banned from international competition, and there will be more scrutiny of powerhouse athletics nations like Russia and Kenya. In January, marathon champion Rita Jeptoo became the 45th Kenyan to fail a doping test, while 25 Russian walkers have been suspended for doping offences in the past six years.

London 2012's reputation as the cleanest Games in 50 years will also be questioned, as the sport struggles to assert its credibility and reputation.