With just four weeks until the World Championships in Beijing, this weekend's Anniversary Games is an opportunity for the world's best to silence the doubters and send messages of intent to their rivals.

Can they recapture their glorious form of old and what should we expect from the famous five this weekend?

'Gatlin miles ahead of Bolt on road to Beijing'

Usain Bolt has raced over 100m just once this season, recording 10.12 seconds back in April, so this is a big weekend for him.

He pulled out of the Paris and Lausanne Diamond League meetings with a pelvic injury so he's got a fair bit of ground to make up.

Justin Gatlin, consistently running around 9.7 seconds in the 100m, is head and shoulders above everyone else and I'm not sure Bolt will get in shape to beat the American at the World Championships in Beijing in August - but he'll certainly be thinking he can get into shape to win a medal. 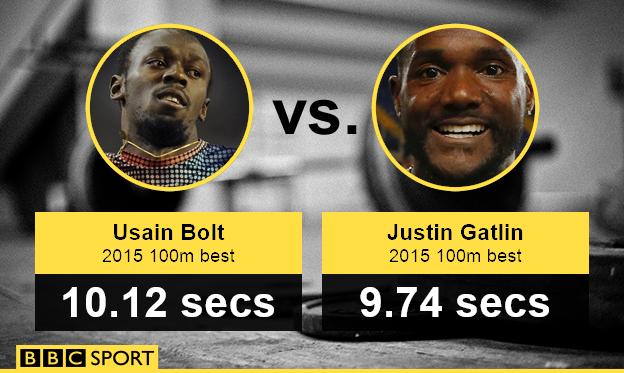 But this is Bolt, a six-time Olympic champion and the 100m and 200m world record holder, so it's difficult to measure him against normal standards.

I've been a little surprised this season because we'd been led to believe he was in good shape, but when I saw him running the 200m in New York last month his performance was laboured, although admittedly his run of 20.29 seconds was enough to win. He didn't look like a guy who was ready to run really fast, but he's had his problems and hasn't been able to move forward.

He still has time, another month to prepare for the Worlds, and that's a long time for an athlete who is on his way back from injury so Friday isn't his last chance, and I doubt whether he'll make a decision about Beijing this weekend.

His performance at the Olympic Stadium will obviously have a big sway, but I don't think he'll be too concerned if he doesn't run as quickly as people expect. He just needs to know he can be competitive.

But I don't think he'll go to China next month if he can't run 9.8 secs in the 100m and sub 20-secs in the 200m at the very least because you would assume Gatlin has something up his sleeve, the ability to go a bit quicker.

We'd all like to see a fit Bolt take on Gatlin, but the American is miles ahead in terms of his preparation for Beijing.

'No reason to boo Farah on return to London'

There's been much talk about what sort of reception Mo will receive when he competes in the 3,000m on Friday night but I don't understand why there should be a negative reaction.

These are athletics fans and they've come to watch Mo so why would they think of booing him? What's he done wrong? Mo says he has never taken performance enhancing drugs and says his coach, Alberto Salazar, has reassured him the doping allegations made against Salazar in July were false.

I don't think Mo will be worried about the crowd's reaction and I don't know why people think that is an issue. In fact, I think it'll be the opposite and Mo will get a lot of support. They'll be delighted to see him running in the stadium where he won his two Olympic golds.

As an athlete, the one thing you can control is your training and your racing and, on the track, things are going well for Mo. He has the ability to tackle any distance and he should be able to win on Friday night with his eyes shut.

'Ennis-Hill can send a message to her rivals'

This isn't a season-defining weekend for Jess. She's had a great comeback since returning to the sport after injury and becoming a mother, and has probably ticked the box she wanted, which was to return at a very good level.

The next stage is for her to see whether she's moved on. It will be a busy weekend, competing in the 100m hurdles, the 200m and the long jump but, I think, if she's quick in the sprints she'll decide to go to the World Championships.

She's on the up, getting better, improving, and all athletes love to be in that position going into a major championships.

If Jess wasn't thinking of going to Beijing she wouldn't be doing three events this weekend.

She's not committing to anything, which keeps her rivals guessing, and she will want to put a string of performances together which will give her a lot of confidence and send a message to others. 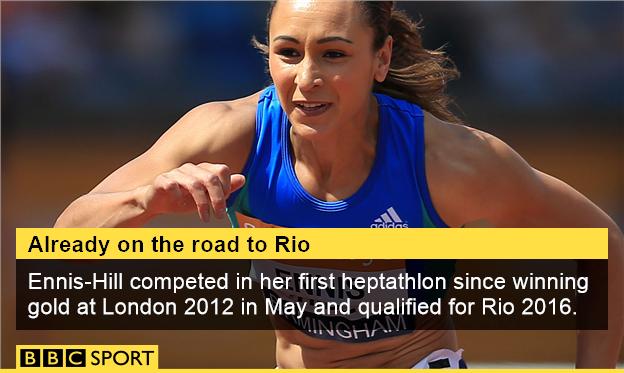 'Rutherford can win gold in Beijing'

Greg Rutherford will be in contention for long jump gold at the World Championships. He may have to jump further than he has ever done, but Greg's shown he's a big-time competitor.

He's jumping better than ever, looks fitter, stronger and faster. There's probably eight or nine men in contention to win in Beijing, and Greg is one of them. But the difference between Greg and the others is that he's done so on the big stage before, winning Olympic, Commonwealth and European titles.

Two of the four men who've jumped further than him this season, American Marquis Dendy and South African Zarck Visser, will be in London, while Olympic triple jump champion Christian Taylor [who has a best of 8.19m in the long jump] will also be trying to stop Rutherford from claiming a third Diamond League win of the season.

Greg never lacks confidence and when you're in a technical event you have to be able to respond to what other people have done and Greg has been pretty good at doing that in the past.

Will front-runner Rudisha mix it up?

Rudisha, returning to the track where he broke the 800m world record in one of the most memorable performances of London 2012, could run well in Beijing and not win a medal.

Commonwealth champion Nijel Amos, who is also in London, is in great shape and beat the Kenyan four times in 2014 and again in Lausanne two weeks ago.

I'd like to see Rudisha mix it up, but his team very much want to stick to their game-plan. The best 800m runners are so used to fast races these days that unless Rudisha runs one minute 42-second pace, they're just going to sit on his shoulder and take him on, and that's not a great position to be in.

Back in 2012 he could run away from everybody but, at the moment, he can't. The others have the ability to stick with that pace and still be strong, if not stronger, down the home straight.

I don't think we'll ever see him run as quickly as he did at the Olympic Stadium three years ago, when he became the first man to run below one minute and 41 seconds, because of how much he's missed through injury. He missed the 2013 World Championships with a knee injury and had problems with his calf last season.

But I've spoken to him a couple of times during the season and I know his aim is next year's Olympics. He's happy to be racing, to be competitive and doesn't want to get hurt ahead of next year.