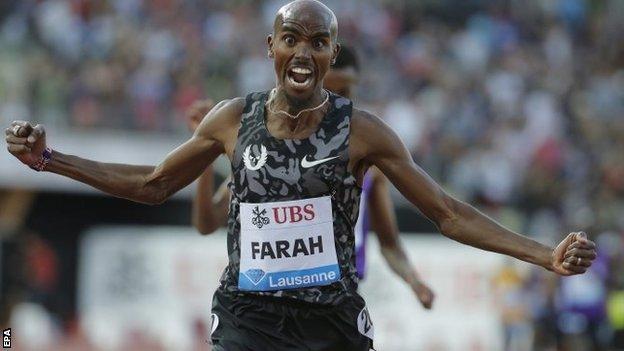 Mo Farah has been accused of swearing at British rival Andy Vernon following his winning return to the track.

Vernon called Farah "disgraceful" for snubbing and allegedly abusing him after his 5,000m win in Lausanne.

The double Olympic champion, racing for the first time since doping claims against coach Alberto Salazar, had a row with Vernon on Twitter in February.

"I went to shake his hand and he turned his back on me," said Vernon, 29. "I wanted to bury the hatchet."

Asked if there had been a clash with Vernon after the race, Farah said: "I don't know, not that I saw."

Farah celebrated wildly, punching his chest and shouting with delight as he won Thursday's race in 13 minutes 11.77 seconds - Vernon finished 15th with a time of 13:47.97.

Radio 5 live summariser and former British athlete Allison Curbishley said: "I don't think I've ever seen Mo Farah show that much emotion over the line, even when he took his double title at London 2012."

Earlier this year, Farah called Vernon "an embarrassment" after he criticised the lack of high-level competition to face Farah in Birmingham.

Somalia-born Farah then claimed the Hampshire athlete suggested he did not deserve to win European 10,000m gold last year because he was not European.

"I'm going up to Font Romeu [where both men train] in a few days' time and I just wanted to end it," Vernon told reporters in Lausanne, adding that Farah swore at him.

"To not even be a sportsman and shake my hand I think is pretty disgraceful, to be honest.

"Like in the armed forces, you salute the rank not the person sometimes.

"I wanted to congratulate the performance. Whether we're friends or not, I can appreciate a good performance but I get that reaction."