This year's London Marathon could be the greatest in history with defending men's champion Wilson Kipsang and world record holder Dennis Kimetto going head-to-head for the first time.

With five of the seven fastest men ever competing on Sunday, Kipsang, 33, said a quick time would be "easy".

"With this kind of field, it will be a fast race and more tactical," he said.

Kenyan runners are expected to dominate the women's race with Mary Keitany bidding for a third victory in London.

The fastest woman in the field is Keitany and her biggest challengers are defending champion Edna Kiplagat and compatriots Mary Keitany, Florence Kiplagat and Priscah Jeptoo. The elite women will start at 09:20 BST.

Much of the build-up to Sunday's event has focused on women's world record holder and three-time London Marathon winner Paula Radcliffe.

The 41-year-old will set off at 10:10 BST with club runners on her London Marathon farewell.

It is the men's elite race, which starts at 10:10 BST, where a rousing finish is anticipated in a showdown between two of the greatest marathon runners of their generation.

Two-time London Marathon winner Kipsang has been in fine form leading up to the race, winning his last three events in the World Marathon Majors series.

"I'm expecting a big challenge from Dennis," said Kipsang, who set the London course record in 2:04.29 last year. "I broke the world record in Berlin in 2013, then he broke the record last year."

Rain and wind are forecast in London during the race, which could ruin hopes of a world record, but Kipsang said there are plenty of reasons to get excited.

"If this was a World Championship field, this would be enough," added Kipsang.

"When we are together, people can really see the potential in the athletes and it's easier to get people excited. 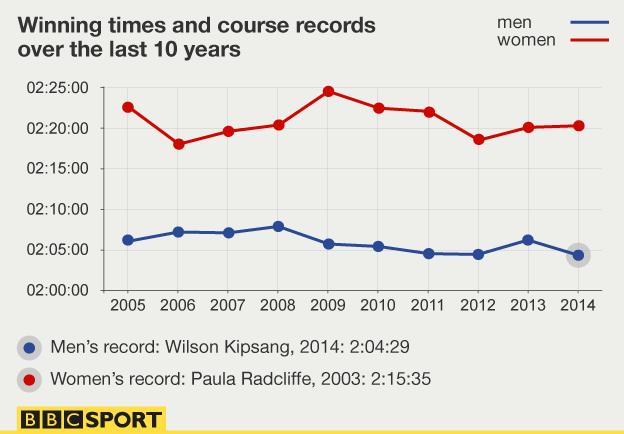