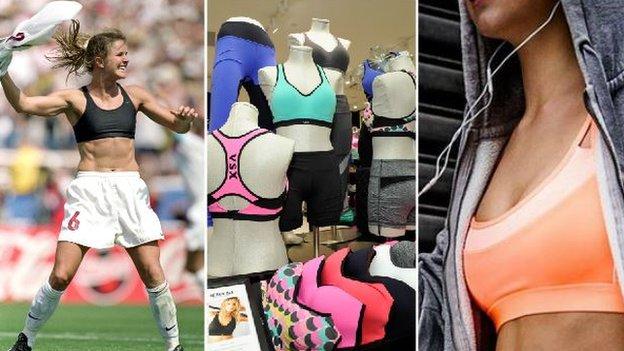 They were some of the most recognisable television scenes of recent decades.

Pamela Anderson, in her Baywatch role as lifeguard CJ Parker, would patrol the beaches of Los Angeles County, spot a swimmer in distress and spring into action - sprinting across California's golden sands and into the glittering sea.

So quick was her reaction to danger, that viewers needed slow motion to watch their big-bosomed hero bound along, her breasts swinging from side to side, nothing but a red swimsuit to support them.

Not once did her face contort in pain. Never was there any sign of bleeding nipples or sores. This was an all-American woman who did not let her DD cups get in the way of saving lives.

Perhaps it is the memory of CJ Parker's easy grace that makes it so hard to believe the Amazons of ancient Greece, so legend goes, cut off their right breasts to take part in archery.

Likewise it is difficult to comprehend that French sportswoman Violette Morris chose to have a double mastectomy in the 1920s because her breasts "impeded control" of her racing car.

But the reality is that sporty women have always had to endure breast pain, wrap their busts with elastic or double up on everyday brassieres - or at least they had to until the invention, 38 years ago, of the sports bra.

Hinda Miller, the garment's inventor, recalls those difficult days of running without sufficient support. It was a time of bouncing boobs and "lecherous" men.

"We had witnessed bleeding nipples in the first 5km runs that were just starting to be popular in the 1970s," she told BBC Radio 5 live.

"We knew there was something unhealthy. If your breasts bounce it can tear the Cooper ligaments [that maintain the shape and configuration of the breast] and that's not good for breast feeding and other things women do in later life."

Miller and two friends, Lisa Lindahl and Polly Palmer-Smith, set out to solve the problem experienced by women worldwide who were struggling to embrace the rise in popularity of running and fitness in the 1970s. Their light bulb moment? A basket of dirty washing.

When Lindahl's husband grabbed his jock strap from the laundry and wore it across his chest like a bra, the Jockbra, which would later become the Jogbra, was born.

"We said 'wait a minute, that's what we want to do'," recalls Miller. "So we bought two jock straps, used the wide band that goes around a man's waist to go underneath our rib cage.

"We left one pouch on, took another pouch from the second jock strap and sewed it along the band so it looked like two triangles on a wide band.

"Then we took the butt straps, sewed them together, crossed them in the back, no clasps, nothing to dig into the skin, pulled it on over the head and that was the first prototype."

As the 1970s entered its final year the trio were ready to introduce their product to the world, or to a few specialist sports shops at least.

Some shops were said to be squeamish about displaying bras and the first editions were packaged in black boxes to make it easier for bashful men to sell, but the first 40 produced quickly sold out and in the second year sales were worth $500,000.

"A lot of people wanted to sell the Jogbra and we used to give them a test," says Miller.

"If you can say the word nipples and look someone straight in the eye, then you can sell the Jogbra."

But what impact has the invention had? "If I forgot my sports bra, forget it, I just wouldn't compete," says Goldie Sayers, 11-time British javelin champion. "That's how integral it is to my performance."

Every athlete has a pre-competition ritual. Anyone peeking inside Sayers' hotel room before a major event would have found the thrower looking at herself in the mirror, repeatedly bouncing as if on an imaginary pogo stick.

"I'd always have a bounce test to see which bra was the best before going out to compete," explains the 32-year-old. "I'd get my room-mate to help me decide."

The sports bra allowed Britain's most successful gymnast Beth Tweddle to flip, twirl and dazzle with freedom. The three-time world champion could focus on her sport and "not what my body was doing".

"You want the whole focus to be on you and your horse," says the 25-year-old. "Constantly worrying that your bra straps are falling down is not helpful.

"I don't think young girls are aware of breast issues. It could be very, very bad for me if I did ride in a normal bra and I wasn't aware of that as a young girl."

Not wearing the right sports bra can damage the breast, cause pain and sagging but, according to research by the University of Portsmouth, the majority of women who exercise do not wear one.

In a questionnaire issued by the university, 46% of 2,000 young girls said their breasts were a barrier to participating in sport.

"There's a need to educate girls and empower them to make the right choices about their breast health, whether that's to do with wearing the correct sports bra or how to choose that sports bra," says Amanda Brasher from the university's Research Group in Breast Health.

Brasher can empathise with those who are self-conscious when exercising, recalling the "mortifying" moment the BBC came to film and take photographs of her as a promising 17-year-old tennis player, arms crossed at the net, cleavage accidentally showing.

"It's something that's etched in my mind," she says. "I think the power of sport is huge and it's shocking so many girls drop out of sport. 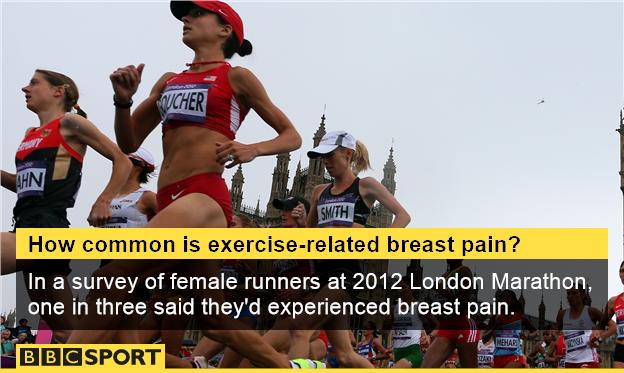 "A sports bra should be as important as your shoes and you should replace them as often as you replace your shoes. If we educate and empower women, we would get 100% of them wearing a sports bra."

If there is a need to educate and empower, there is also a need to entice. World marathon record holder Paula Radcliffe says women need to feel good when exercising.

Ten years ago it would have been difficult for women of cup sizes D and above to buy suitable sports bras, but there has since been an "explosion" in the market as manufacturers have grasped the need for good supportive, fashionable sports bras.

"There are a lot more insecurities stopping women taking part in sport than there are for men," says the three-time London Marathon winner.

"A lot of women want to feel comfortable, feel attractive, feel good about themselves when they're doing sports."

Listen again to BBC Radio 5 live's special Bounce: The story of the sports bra via the iPlayer or download the podcast.