The 25-year-old clocked a season's best 6.51 seconds in a race where his main rival and team-mate Chijindu Ujah was disqualified for a false start.

Dina Asher-Smith secured 60m silver to become the first British female in 30 years to win a medal in the event.

The 19-year-old equalled the British record 7.08 to finish 0.03 secs behind champion Dafne Schippers.

"I was looking at the screen, begging that I'd grabbed a medal spot," said Asher-Smith, the 100m world junior champion. "I had no idea what was going on but I got a silver so I'm over the moon. The time is a bonus."

The final individual race of the day was expected to be a gold-medal showdown between Kilty and Ujah, only for the latter to falter in a nervous start.

"I felt the guy next to me twitched," said Ujah, 21. "I've never false started in my life. For that to happen here, I'm gutted." 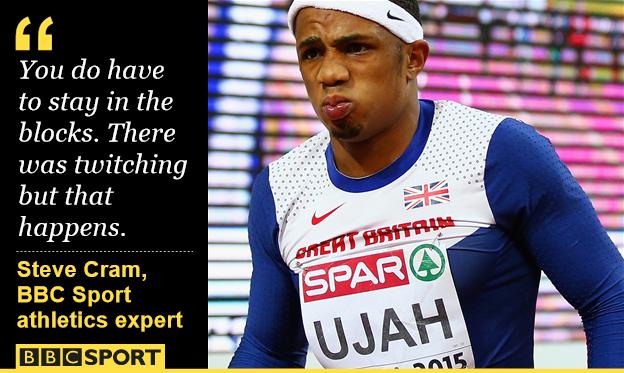 With Ujah out of the race, Kilty - a surprise winner at the Worlds last year - was expected to claim gold and did so comfortably.

The Stockton sprinter told BBC Sport: "I had a difficult summer and there was a lot of pressure coming into this for me. It's an absolute honour, I'm on top of the world.

"I've been through tough circumstances in my life. It shows whatever background you're from you can make it. Anything is possible."

Home favourite Jakub Holusa overtook Turkey's Ilham Tanui Ozbilen on the home straight to secure gold in front of a raucous crowd with a national record 3:37.68.

Jenny Meadows did not compete in the 800m final after a virus the 33-year-old Wigan athlete had been suffering with all week worsened overnight.

In the 2011 champion's absence, Switzerland's Selina Buchel won in 2:01.95 - a time the Briton has eclipsed four times this season.