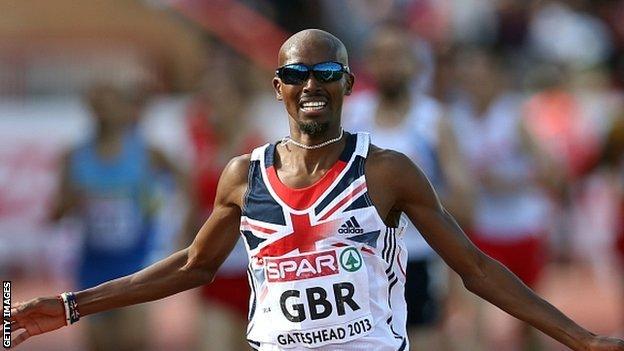 Double Olympic champion Mo Farah intends to compete for England in the 5,000 and 10,000m at this summer's Commonwealth Games in Glasgow.

Farah has not raced since the London Marathon in April, when he finished eighth on his debut in the event.

The 5,000m is the first men's track title to be decided in Glasgow, before the 10,000m takes place five days later. Neither event has heats.

Farah, 31, is also the defending world champion over both distances.

Farah's involvement is a boost to Games organisers, with Britain's Olympic heptathlon champion Jessica Ennis-Hill absent because she is expecting her first baby and Jamaican sprinting legend Usain Bolt yet to commit.

Farah is scheduled to run in a special event at the Diamond League meeting in Glasgow on 12 July, with the Commonwealth Games commencing 11 days later.

The Londoner, who will face stiff competition from Kenyan and Ugandan athletes at the Commonwealth Games, finished ninth in the 5,000m at the 2006 Games in Melbourne but withdrew from the 2010 Games in Delhi because of fatigue.