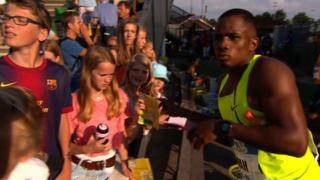 Watch Chijindu Ujah become only the fifth British 100m sprinter in history to dip under the 10-second barrier at the FBK Games in the Netherlands.

The 20-year-old Londoner clocked a time of 9.96 seconds, putting him third on the all-time list.

Only 1992 Olympic champion Linford Christie and British champion James Dasaolu have now ran the distance quicker than the Enfield and Haringey Harrier.

Massive punch in the face - Klopp