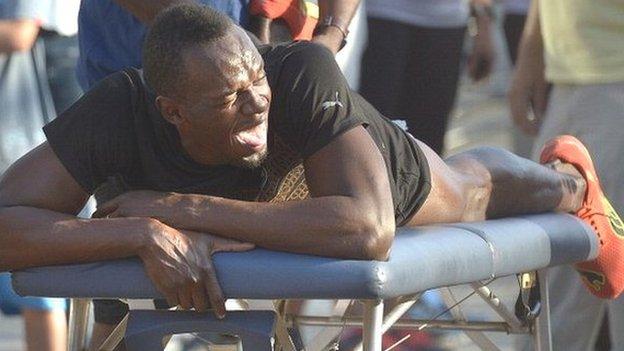 Six-time Olympic champion sprinter Usain Bolt has delayed his return to competition after falling behind in training because of a foot injury.

Bolt, 27, said he was "100% healthy" and back in full training after missing sessions in late March and early April.

But added: "Unfortunately due to the training that I missed I'm behind where I normally am at this time of year."

The 100m in the Czech Republic town of Ostrava on 17 June would have been the Jamaican's first race of the year. He had also received top billing for the 100m in Paris on 5 July.

"I hope to be back in competition soon, but how soon will depend on my training in the next few weeks," said the double world and Olympic champion.

"It is important for me to take my time this year as I have three tough years ahead in 2015, 2016 and 2017 as I attempt to defend my world and Olympic titles.

"I definitely plan to compete this season and will continue to work hard with my coach who I have the utmost confidence in to get me fit and ready to compete."

Bolt has yet to confirm whether he will compete in this summer's Commonwealth Games in Glasgow.