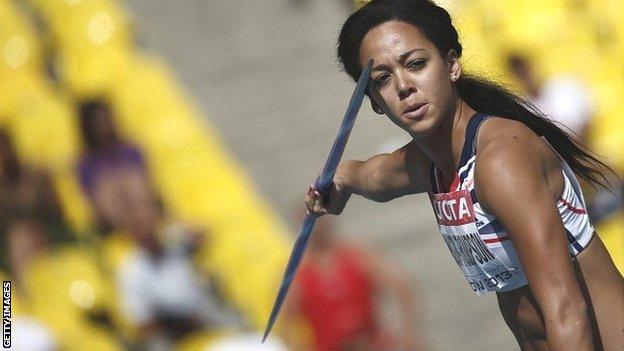 Heptathlete Katarina Johnson-Thompson has said she has not achieved anything yet despite her "incredible" victory at the prestigious Hypo-Meeting in Gotzis.

The 21-year-old Briton scored a world-leading 6,682 points on her debut in Austria, setting a personal best to go third on the British all-time list.

"It means everything, but in a way it means nothing because it's not a major title to my name," she told BBC Sport.

"To win is an amazing achievement but the Commonwealths is the main goal."

Only Olympic champion Jessica Ennis-Hill (6,955 points) and 2000 Olympic champion Denise Lewis (6,831) are now above the Liverpudlian in the British all-time list following her exploits at the weekend.

In a competition which attracted the world's best multi-eventers, the European under-23 champion beat Canada's Brianne Theisen-Eaton - one of her main rivals at next month's Commonwealth Games - by 41 points.

The victory will give the Liverpool Harrier a psychological edge over her rivals, with world silver medallist Theisen-Eaton setting a Canadian record 6,641 points in Gotzis and world bronze medallist Dafne Schippers setting a Dutch record 6,545 points to finish third.

"It was like an Olympics in itself," added Johnson-Thompson, whose score in Austria would have won her gold at last year's World Championships in Moscow, where she finished fifth.

"The field was pretty much the field which will be in Beijing at next year's World Championships.

"I couldn't believe I was the winner. I'm just trying not to get ahead of myself. It was only the opener for me.

"My goal this season is to win a medal at the Commonwealths. Next year, at the 2015 World Championships, that's when I need to be winning stuff."

Johnson-Thompson, described as the future of athletics by Daley Thompson - a previous winner himself in the Austrian town - set lifetime bests in both the 200m and javelin in what was her first heptathlon competition since Moscow.

But despite shattering her personal best in the event, Johnson-Thompson said her performances in some disciplines - notably the 100m hurdles where she was 0.03 outside her 13.47-second personal best - was disappointing.

Nevertheless, what the woman often described as the 'next Ennis-Hill' enjoyed most in Austria was "being in the mix" after spending the last couple of years "in the background as an up-and-coming athlete".

"I loved having to run the 800m with something to compete for," said Johnson-Thompson, second overall before she completed two laps in 2:08.16 to secure victory.

"In the heptathlon it's difficult to have everything come together. I had different expectations from different events.

"But unexpected things came together, like the Javelin, where I threw 41.44m after a few weeks with an elbow problem, and going under 23 seconds for the first time in the 200m."

The British junior heptathlon record holder has enjoyed a remarkable season so far, rapidly rising from a promising junior to one of the world's best by breaking the British indoor high jump record and winning her first major medal with silver in the long jump at the World Indoor Championships.

It is her performance at Gotzis, however, which has confirmed her arrival at the top tier of her sport and rubber-stamped her status as one of the favourites for gold in Glasgow this summer.

"I can get better," said Johnson-Thompson.

"The Commonwealths is next month so I'm going to have to work on some of my weaknesses with my coach. There's no time to celebrate because it's straight back to training."