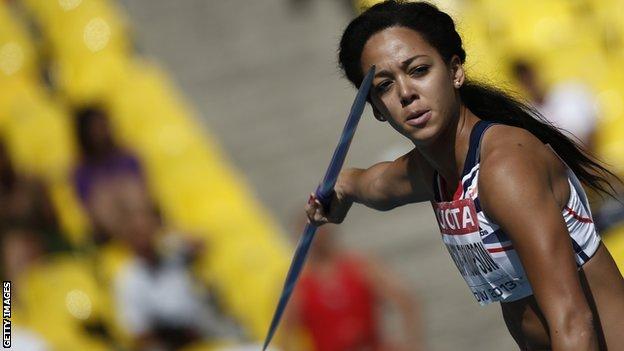 Britain's Katarina Johnson-Thompson set a personal best of 6,682 points as she won the heptathlon at the prestigious Hypo-Meeting in Gotzis, Austria.

The 21-year-old won by 41 points from Canada's Brianne Theisen-Eaton, likely to be one of her main rivals at this summer's Commonwealth Games in Glasgow.

British teen Morgan Lake was 17th as she also broke the 6,000-points mark.

Johnson-Thompson had been second overnight at the event, the annual IAAF World Combined Events Challenge, which boasts a far stronger field than that expected at the Commonwealths.

The Liverpudlian moved into the lead by winning the long jump in the first of Sunday's events, and set a 41.44m javelin personal best before victory in the closing 800m saw her hold off Theisen-Eaton's challenge.

In March, Johnson-Thompson won her first major medal as she took silver in the long jump at the World Indoor Championships, having failed to qualify for the multi-discipline event because of illness.

Britain's Olympic heptathlon champion Jessica Ennis-Hill will miss the Glasgow Games as she is expecting her first child in July.