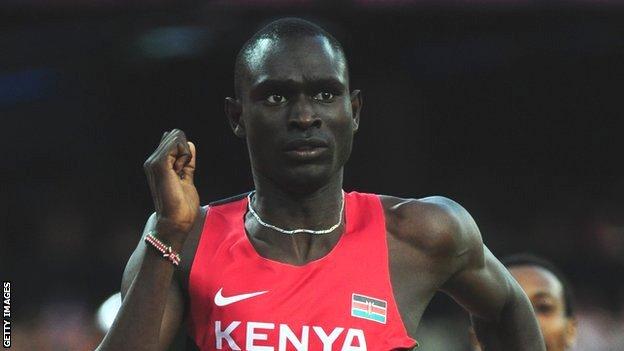 Olympic 800m champion David Rudisha was seventh on his return from injury at the Diamond League meeting in Eugene.

The Kenyan, who broke the world record at London 2012, missed last year's World Championships with a knee injury and has had a calf problem this season.

His time of one minute 44.87 seconds was more than a second slower than that of winner Nijel Amos (1:43.63), with Briton Andrew Osagie eighth.

In a thrilling finish to the 400m, Grenada's Kirani James pipped Lashawn Merritt with both men clocking 43.97 seconds, while Britain's Martyn Rooney was sixth.

Proctor's compatriot Eilish McColgan was 11th in the 3,000m steeplechase, her 10:15.59 more than a minute slower than winner Sofia Assefa, whose 9:11.39 is the best of the year so far and a meeting record.

American Will Claye also broke the meeting record, his 17.66m in the triple jump four centimetres better than the mark set by countryman Christian Taylor, who finished second.

American long-jumper Tori Bowie recorded the fastest time in the world this year to win the 200m in 22.18 seconds, with two-time Olympic gold-medallist Shelly-Ann Fraser-Pryce last.