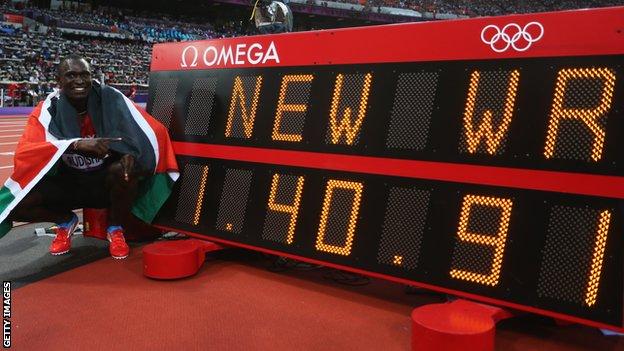 The Kenyan, who broke the world record at London 2012, missed last year's World Championships with a knee injury and has had a calf injury this season.

Among Rudisha's opponents will be Great Britain's Andrew Osagie.

In the 100m, the USA's Justin Gatlin will be up against Jamaican rival Nesta Carter.

Other Britons competing in the United States include Hannah England and Laura Weightman in the 1500m, Eilish McColgan in the 3,000m steeplechase and long-jumper Shara Proctor.

Many eyes will be on 25-year-old Rudisha, however, as he takes on a high-quality field which also includes 2013 world champion Mohammed Aman of Ethiopia, Olympic silver medallist Nijel Amos of Botswana and America's Duane Solomon, who has run this year's world best of 1:43.27.

"It is like being thrown into the deep end," said Rudisha's coach, Colm O'Connell. "People will be anxious and are waiting to see how Rudisha will fare having been out for too long.

"There's always a challenge to come back from injury straight into a big race, but David is an experienced enough athlete not to put pressure on himself. He's seeking a confidence boost to his running.

"Luckily we have not seen an outstanding performance in the men's 800m this season, so the athletes will be almost at the same level of competition in Oregon."

The Diamond League meeting is live on BBC Red Button, online, tablet and mobiles from 21:00 BST on Saturday 31 May