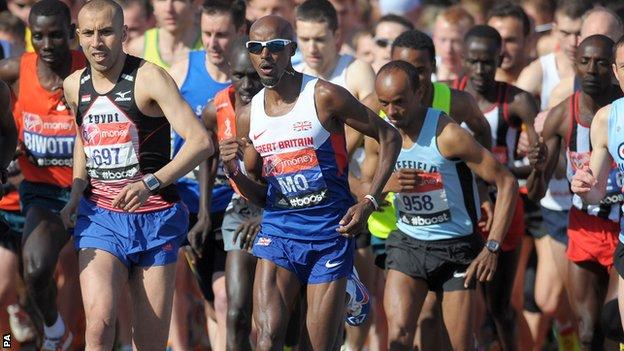 Britain's Mo Farah has been advised by his coach not to run any more marathons until after the 2016 Rio Olympics.

The 31-year-old, who did the 5,000m and 10,000m double at the London Games two years ago, only came eighth in the London marathon earlier this month, four minutes behind Wilson Kipsang.

Farah said straight after the race that he intended to run more marathons.

But his coach Alberto Salazar told the Daily Telegraph: "Let's stick with what he's best at in the world through Rio."

He added: "This was a good year to experiment, because there are no World Championships.

"Now Mo has a full year to get back in track shape for the World Championships and another year to go until Rio."

Salazar had previously suggested that Farah, who also won the 5,000m and 10,000m at the 2013 World Championships in Moscow, might target a 10,000m/marathon double at the Rio Games.

Farah has yet to decide whether he will return to the track in time to compete at the Commonwealth Games, which begin in Glasgow on 23 July.

Salazar added: "He's thinking about it seriously. He hasn't committed but he's open to the idea."