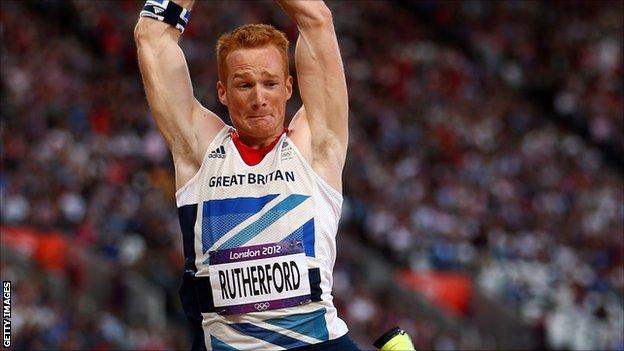 Rutherford, who won gold at London 2012, previously held the record jointly with Chris Tomlinson at 8.35m.

"If you're just waking up I am now the British record holder after jumping 8.51 today in San Diego."

Rutherford fouled his first two jumps and registered a leap of 8.18m before breaking the record with his fourth effort.

The Milton Keynes athlete won the meeting, with Tyron Stewart of the US second with a best jump of 8.39.

Rutherford's first European competition of the season will be at the BT Great CityGames, the street athletics event, in Manchester on 17 May.

He will continue his preparation for the Commonwealth Games in Glasgow, which start on 23 July, by participating in the city's grand prix meeting on 11-12 July.

Rutherford, who jumped 8.31 to win Olympic gold in 2012, had an injury-hit 2013 season, rupturing his hamstring at a Paris Diamond League meeting barely a month before the World Championships in Moscow, where he failed to qualify for the final.