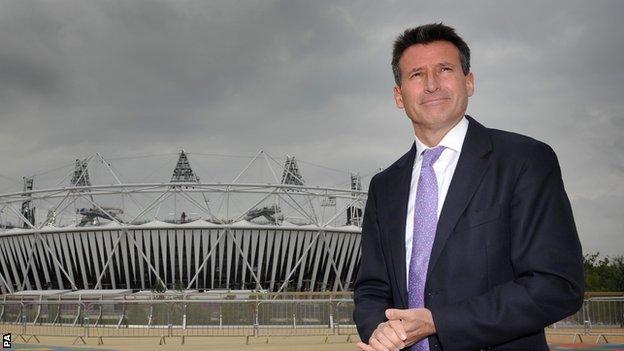 Lord Coe has indicated to BBC Sport that he will seek the International Association of Athletics Federations presidency next year.

Lamine Diack, 80, will step down in 2015 after 16 years in charge of the body that governs world athletics.

It's my sport and it's the basis of everything I've ever done, so why wouldn't I want to take that role?

"I will have to think long and hard about it," replied Englishman Coe, 57.

But the double Olympic champion added: "It's my sport and it's the basis of everything I've ever done, so why wouldn't I want to take that role?"

Coe, who won 1500m gold at the 1980 and 1984 Olympics, is currently one of three vice-presidents of the IAAF, along with former Ukrainian pole vaulter Sergey Bubka and Qatari Dahlan Jumaan al-Hamad.

He is also chairman of the British Olympic Association and led the team that staged the 2012 Olympics in London.

Coe said he was sure other people would be interested in becoming IAAF president but added: "I've always said that if I'm given the opportunity to shape the future of my sport I will grab it."

Diack, a former long jumper from Senegal, has backed Coe, an ex-politician, as a potential successor.

"He is a wonderful leader," said Diack, who praised Coe for his organisation of the London Games.

"He was a wonderful athlete and he is a competent man."