Mo Farah says he is "feeling good" despite collapsing shortly after finishing the New York half-marathon.

The 30-year-old Briton, who fell during the race after being tripped, was taken away in a wheelchair.

"It's not a big deal," insisted the double Olympic champion, who finished second to Kenyan Geoffrey Mutai.

Discussing his fall, he said: "I was seeing stars. Everything was kind of blurred to me. I just wanted to keep going. I didn't want to stop and drop." 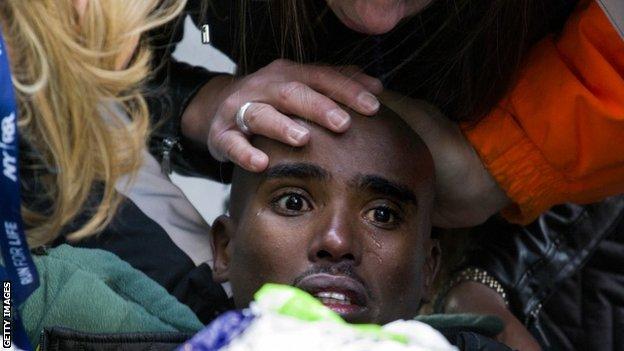 Farah, who is preparing to make his full marathon debut in London in April, had said he was targeting his own British half-marathon record of one hour 59 seconds set in New Orleans in 2013.

Five miles into the race, the 30-year-old was in a leading group of eight but was accidentally tripped from behind and tumbled to the ground, allowing Mutai and compatriot Stephen Sambu to break clear.

Although Farah overtook Sambu with metres to spare, he could not catch Mutai, finishing 18 seconds behind in 1:01.08.

"I'm not sure what happened. I just remember falling and hitting the ground quite hard. I got caught on my hip, my ankle, the whole right-hand side.

"At that point, I just wanted to get back up and get with the group. It did take quite a lot out of me.

"My aim was to just close the gap slowly, but I couldn't quite close the gap. Then, the last four miles, I struggled a bit. I just tried so hard."

In 2009, Farah collapsed after finishing second at the European Cross-Country Championships in Fingal, Ireland.

Kipyego set a new event record with a time of 68 minutes and 31 seconds, finishing 29 seconds clear of Ethiopian Bizunesh Deba, with Molly Huddle of the United States third, 34 seconds behind the Kenyan.