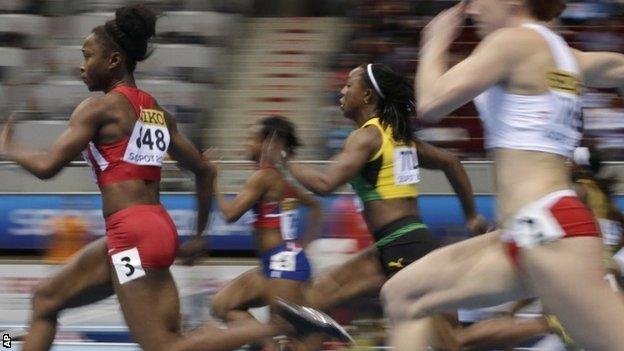 Jamaica's Veronica Campbell-Brown said she lacked sharpness as she qualified for the World Indoor Championships 60m semi-finals - her first race since she was cleared of a doping charge.

The defending champion, 31, finished third in her heat in Sopot, Poland and was 13th fastest overall going into the next round on Sunday.

"When you don't compete for a while, you got to feel a little rusty," she said, after her first race since May.

The 24-year-old former world youth champion posted a time of 7.18 seconds in her heat, while team-mate Sophie Papps joined her in the semis after coming second in her race. The 19-year-old clocked a personal best of 7.22 secs, to finish behind fastest qualifier Murielle Ahoure of the Ivory Coast, who crossed the line in 7.09 secs.

"I'm glad it's out the way," Philip said. "I didn't want to take it too easy because you never know what can happen out there. I got through and that's the main thing. Tomorrow should be a good day."

Other British athletes impressed on the second morning of the three-day competition, although there was major disappointment in the men's high jump where Olympic bronze medallist Robbie Grabarz failed to reach the final.

The 26-year-old and team-mate Tom Parsons were both unable to clear 2.28m.

There was better news in the men's 60m hurdles where Andy Pozzi posted the joint fastest qualifying time of 7.56 secs, equalling his personal best.

"It's a great start," said 21-year-old. "I was a bit concerned being in lane one with some of the fast guys on the other side of the track, but it allowed me to focus on my race and I could not ask for much more."

Team-mate Will Sharman will also compete in Sunday's semi-finals after winning his heat with a new personal best of 7.59 secs.

Meanwhile, both Shara Proctor and Katarina Johnson-Thompson are into Sunday's women's long jump final. Proctor, 25, recorded the third longest jump in qualifying - 6.69m - while Johnson-Thompson, who failed to qualify for the pentathlon because of illness, leapt out to 6.60m.

In the 4x400m relays, the British teams led from start to finish to win their semi-finals.

Conrad Williams ran an extra 120m after the recall gun went off accidentally during the first leg of the men's race, but the quartet still managed to finish first in 3:06.09.

Team captain Eilidh Child, along with Shana Cox and sisters Victoria and Christine Ohuruogu recorded 3:30.60 to finish ahead of Russia and qualify fifth fastest overall.