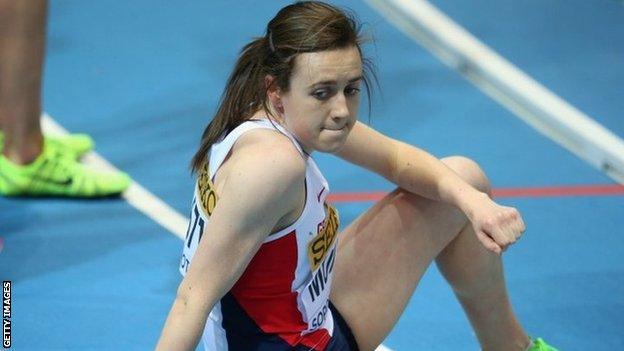 Briton Laura Muir failed to reach the 800m final at the World Indoor Championships after a disappointing display in the heats in Sopot, Poland.

Muir, 20, stumbled during her race and finished second in two minutes 02.55 seconds, which was not quick enough to qualify as a fastest loser.

She was considered to be among the favourites having recently set a Scottish record of 2:00.94.

Stockton's Kilty, 24, a replacement for the injured James Dasaolu, qualified fastest for Saturday's semi-finals with a personal best of 6.53 seconds.

The 35-year-old Chambers (6.57secs) also eased to victory in his heat and told BBC Sport: "I just wanted to get through safely." 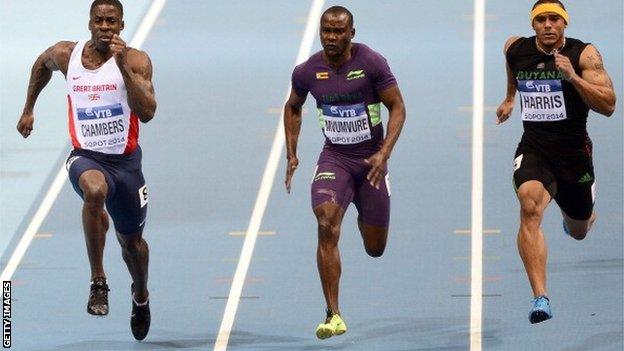 There were only two gold medals won on the opening day. They went to Nadine Broersen, who secured a first gold for the Netherlands in the pentathlon, and defending men's shot put champion Ryan Whiting (22.05m) of the US.

But there was disappointment in the 400m races as Nigel Levine failed to qualify for the men's final and Margaret Adeoye finished fifth in her women's semi-final.

The London 2012 finalist finished second in his heat, behind Pole Adam Kszczot. Osagie's time of 1:45.88 was enough to progress to Sunday's final as one of three fastest losers.

"The women's 60m hurdles final promises to be a really good race. Tiffany Porter is looking really good. That bronze medal from the World Championships last year has elevated Tiffany. She know she's good enough, this time around we have a new improved Tiffany and I really think she's here for a medal. But no one can deny that Sally Pearson isn't looking in super form."

Sunday's final promises to be one of the highlights of this year's competition, with defending champion Mohammed Aman - also the world outdoor champion, 2011 silver medallist Marcin Lewandowski and European Indoor champion Kszczot in the line-up.

Briton Mukhtar Mohammed missed out, despite producing a season's best 1:47.59.

The biggest surprise of the day, however, was Muir who made a poor start to her race and crossed the line third, before being promoted to second following the disqualification of Iceland's Anita Hinriksdottir.

"I tried to start off quick to get a good position but I think I got a little bit caught out and, because I was in lane one, the field came across and I got a bit blocked off," she said.

"You know you've got to win the race in the first place and you can't afford to lose that much ground. I just didn't have it in that final 200m when I needed it."