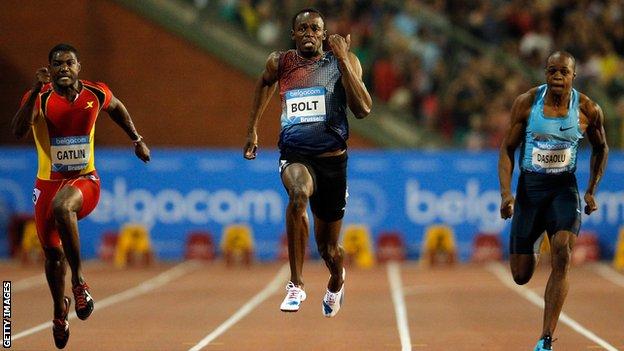 International athletes competing at the Glasgow Grand Prix this summer will be exempt from income tax, the government has announced.

The 11-12 July meeting at Hampden is part of the Diamond League series - the first time it has come to Scotland.

The event takes place two weeks before the Commonwealth Games and should attract several star names.

UK rules impose a levy on visiting sportspeople to include global sponsorship and endorsement earnings as well as any appearance fee.

A similar exemption for the Commonwealth Games was announced in January 2012.

"As soon as the law changes I'll be here all the time," Bolt said in 2012 after winning three gold medals at the London Olympics. "I love being here, I have so many Jamaican fans here and it's wonderful."

Bolt will race at the Paris Diamond League on 5 July but remains undecided on competing at the Commonwealth Games.

Paul Bush, chief operating officer for EventScotland said: "Hosting the Glasgow Grand Prix, a leg of the IAAF Diamond League is testament to our credentials as a major event destination and we welcome the HMRC announcement agreeing a tax exemption for non-UK athletes.

"Scotland is the perfect stage for major events and this exemption will help to attract the world's leading athletes to the event in July."