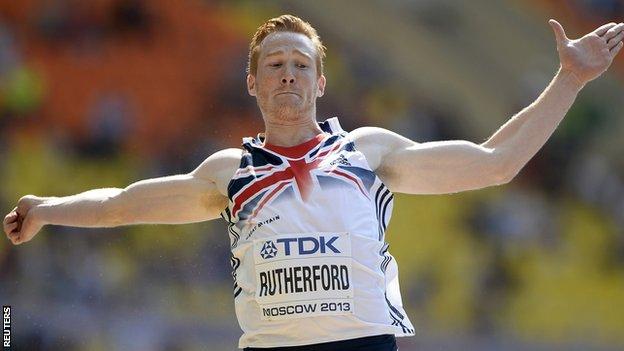 Long jumper Greg Rutherford will make his first appearance of the season at the Birmingham Grand Prix on Saturday.

The 2012 Olympic champion is joined by British team-mates including sprinters James Dasaolu and Dwain Chambers, and pole vaulter Holly Bleasdale.

There will be 23 Olympic and Paralympic medallists on show at the indoor meet.

Two-time Olympic champion Shelley-Ann Fraser-Pryce goes in the 60m and Genzebe Dibaba aims for a third world record in 14 days in the two miles.

Rutherford endured a difficult 2013, splitting with his coach Dan Pfaff, losing his sponsorship deal with Nike and failing to make the final of the World Championships in Moscow after suffering a hamstring tear in the run-up to the tournament.

His build-up to the start of the current indoor season has been delayed, but the 27-year-old, who jumped 8.31m to win London 2012 gold, says he is looking forward to competing against the likes of Russia's Aleksandr Menkov, the Netherlands' Ignisious Gaisah and Mexico's Luis Rivera.

"The field looks incredible," said Rutherford. "All three medallists from Moscow will line up and while this is my first competition since [then], it'll be a great test to see where I'm at before preparing for the summer season.

"Menkov is already in great shape, but I'm hoping the crowd will get behind me and my British team-mates."

All British competitors will hope for a strong showing with the squad for the World Indoor Championships in Poland being selected next week.

Dasaolu and Chambers will be up against Kim Collins, Nesta Carter, Christophe Lemaitre and Jimmy Vicaut in the 60m, while British pole vault record holder Bleasdale will look to continue a strong start to the season against Olympic silver medallist Yarisley Silva.

Jamaican Fraser-Pryce will clash with Murielle Ahoure of the Ivory Coast at 60m, while in the two-mile race Ethiopia's Dibaba, who shaved six seconds off the indoor world record in the 3,000m last week in Stockholm, will be looking to better the 9:06.26 set by two-time Olympic 5,000m champion Meseret Defar in 2009.