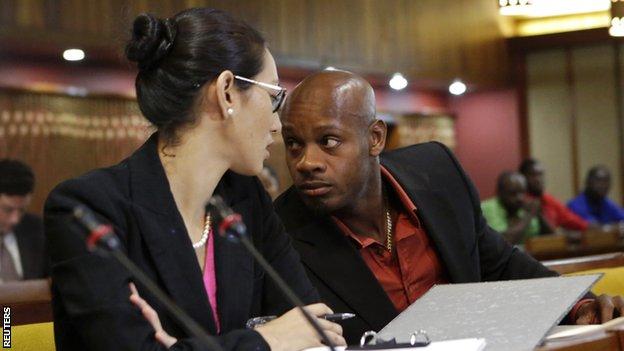 Sprinter Asafa Powell has told a Jamaican anti-doping hearing he did not list all his supplements at trials as he could not remember their names.

The former 100m world record holder, 31, tested positive for the banned stimulant oxilofrine at the national championships in June.

He said the naming oversight was caused by his "excitement" about the trials.

Powell and his attorneys are attempting to explain the result to a three-person Jamaica Anti-Doping Commission panel.

The hearing in Kingston, which began on Tuesday, is expected to last at least two days.

Training partner Sherone Simpson tested positive for the same stimulant but denied being a "cheat" at her hearing.

Powell was one of several witnesses to testify at Simpson's hearing, which was adjourned until 4 February.

The pair are among five Jamaican athletes who failed drugs tests at the national championships. Discus throwers Allison Randall and Traves Smikle and high-jumper Demar Robinson had their disciplinary cases heard last month.

Powell and Simpson, who won silver in the 4x100m relay at the London Olympics, have been provisionally suspended since the positive tests were confirmed and missed the World Championships in Moscow last August.

They both blamed the positive tests on a new brand of nutritional supplements given to them to them by a recently hired physical trainer, Canadian Chris Xuereb.

He further revealed he began taking two capsules of that product from early June, an amount he doubled at Xuereb's suggestion on the morning of the trials.

Powell only told doping control officer Paul Wright about some of the supplements he was taking at that event, listing just three on his declaration form.

Jadco attorney Lackston Robinson accused Powell of being "significantly negligent" after hearing Powell's excuse that the thrill of attending the trials caused him to forget many of the supplements' names.

Xuereb has said he did not give Powell and Simpson any performance-enhancing drugs and only purchased major-brand vitamins, claiming in July that "both athletes are clearly looking for a scapegoat."

Powell was the last man to hold the individual 100m world record before compatriot Usain Bolt broke it in 2008. He later helped Jamaica win 4x100m relay gold at the 2008 Olympics in Beijing.