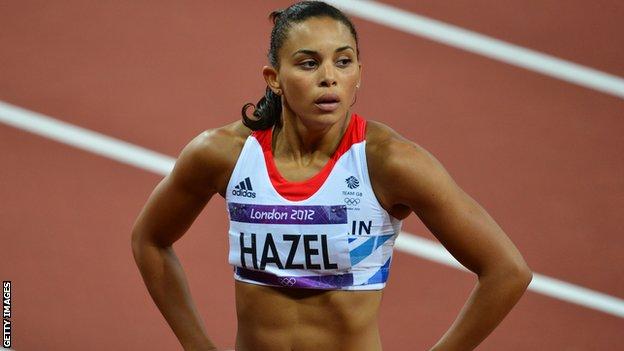 Heptathlete Louise Hazel has confirmed she is considering making a comeback for this year's Commonwealth Games.

Hazel said in September that she was retiring, but described Jessica Ennis-Hill's announcement of her pregnancy as a "game changer".

The 28-year-old Commonwealth champion said "the temptation is there" to defend her title in Glasgow.

She added: "My body is still in good shape. It's definitely something I'm not ruling out."

"If Louise Hazel does decide to pull the spikes back on, successfully defending her title from Delhi will be far from simple.

"Katarina Johnson-Thompson was the highest ranked English athlete in the heptathlon last year and is seen by many as the natural successor to Jessica Ennis-Hill.

"Canada's Brianne Theisen-Eaton will fancy her chances if she competes. She finished the year ranked fourth and, as such, was the highest ranked Commonwealth athlete.

"The lure of Glasgow and a defence of her title may prove too much to resist for Hazel though.

"If she decides to compete, we could be in for quite a battle."

Olympic champion Ennis-Hill said on Friday that she was expecting her first child and would miss the Glasgow Games in late July.

Hazel, who won gold in Delhi in 2010, will consider a return over the coming weeks.

"Six months ago when I retired, I was focused on starting my business," added the ambassador for the Commonwealth Games England team.

"But that is now up and running and my body is still in good shape.

"Nobody wants to give up their crown and competing at Glasgow is a huge lure too.

"I love competing at the Commonwealth Games. The banter with British team-mates who are Scottish, Welsh or Northern Irish was fantastic. You wanted to take them down!"

Hazel, who described England Athletics' selection policy for the 2014 Commonwealth Games as "elitism gone mad" last year, competed for Great Britain at the 2006 European Championships and went on to finish 14th at the 2009 World Championships in Berlin.

Her personal best of 6,166 points, set in Germany in 2011, ranks her as the seventh best British heptathlete of all time.

But at the London 2012 Olympics, she could only finish 27th while Ennis-Hill took gold and Katarina Johnson-Thompson came 15th.