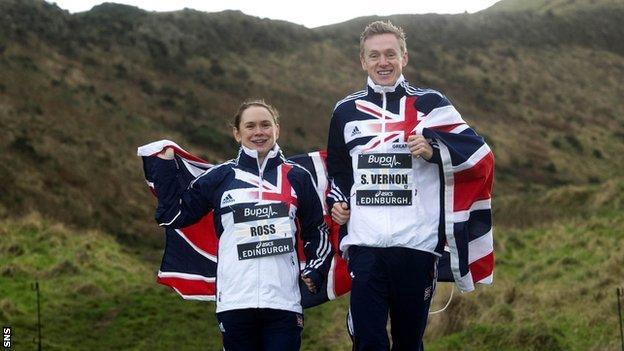 Andrew Butchart will win his first British vest when he races in the Bupa Great Edinburgh XCountry 25th anniversary race on 11 January.

Butchart, 22, is thrilled at his first GB call-up at any age-group level.

"I've never represented GB up until now so to go straight in at Senior is exciting," he said.

The 36-strong GB & NI team will hope to win the title while the USA will also send a strong team.

Butchart, a lifeguard and physical trainer at Gleneagles, just missed out on the Under-23 team for the European Cross Country Championships in Belgrade last Sunday.

Hawkins, whose brother Derek will represent Scotland in the marathon at the Commonwealth Games in Glasgow next summer, has been rewarded for his seventh place and team gold medal in Belgrade with a place in Edinburgh.

"I was on stand-by as 'first reserve' for the Under-23s for the Euro Cross after running well in the trial at Liverpool and ended up sitting by the phone for a week and hoping there might be a call-off," said Butchart.

"It never happened and it was frustrating so to get word now that I will wear a GB vest in Edinburgh is terrific news and, really, it just tops off a good 2013 for me."

Butchart revealed that a year ago he reassessed his training regime and decided he could push himself further and he soon reaped the benefits.

He continued: "I was lucky in January when there was a call-off for the Celtic Games in Wales for the Under-23 team and I was called in for that one. I ran well in Cardiff and that day in the snow kick-started things for me and changed my attitude.

"It led to a much better track season and hopefully now I'm carrying that on into cross country. I am certainly training harder now than I did in 2012.

"We've a strong team ethic at Central AC. The guys all get on well together and training is both friendly and competitive. We push each other on.

"It is great for Scotland to have five athletes picked. Callum Hawkins and Rhona Auckland did extremely well in Belgrade in the Euro Cross (Edinburgh University student Auckland finished seventh in the women's Under-23 race) and that kind of thing does act as a spur and an inspiration for other athletes.

"You start to think, 'maybe I could do what they are doing'."

"I've run in the Inter-District race in Edinburgh on many occasions and it is always a good fixture with the TV cameras there and usually a bit of a crowd.

"Now I will go there with a 12-strong GB team and one of your first goals is to try and beat a few of your team-mates and prove you can compete at that level."