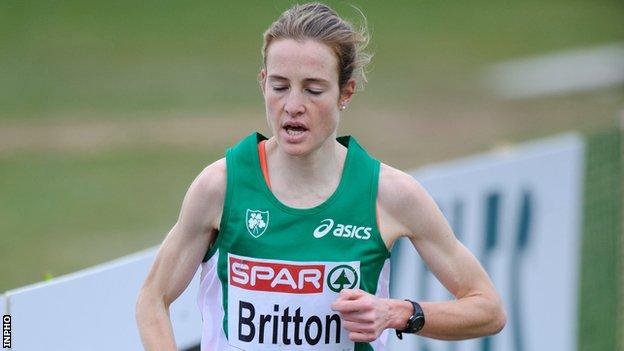 Fionnuala Britton's hopes of a third successive European Cross Country title were dashed as she had to settle for fourth place in Belgrade on Sunday.

The Irishwoman, winner of the last two stagings of the event in Velenje and Budapest, finished 11 seconds behind French victor Sophie Duarte.

with Portugal's Ana Dulce Felix four seconds ahead of Britton.

Northern Ireland hope Paul Pollock had to settle for 26th in the men's race.

Pollock went into the race with ambitions of challenging for a high finish after his impressive win at last month's Irish Inter-Counties event.

However, after being in the leading half-dozen early on, Pollock then dropped back as he finished a minute and 11 seconds behind Spanish winner, Alemayehu Bezabeh.

Michael Mulhare was the top Irish finisher in 15th spot, 56 seconds off the pace with David McCarthy a further five seconds back in 18th, Dan Mulhare 31st, Mick Clohissey in 56th and North Belfast athlete Stephen Scullion 63rd, two minutes and 29 seconds adrift of the winner.

Winner Bezabeh, who also triumphed in the event in 2009 but only returned to action earlier this year after serving a doping ban, finished 21 seconds ahead of Turkey's Kenyan-born Polat Arikan with Pollock's regular training partner Britain's Andy Vernon winning bronze after outsprinting Belgium's Jeroen D'Hoedt.

Arikan's challenge was affected by a fall early in the race when he tripped over the course's only barrier.

In the women's race, Britton was in a lead group of seven athletes after the opening lap with pre-race favourites Steel, Felix and Belgium's Almenesh Belete all in contention along with Norway's 2009 European junior champion Karoline Bjerkeli Grovdal.

However during lap two, it appeared that Britton, whose summer track season was cut short because of a stomach virus, was having to work hard to stay with the leaders which was a pattern repeated over the following two circuits.

Duarte made her push for victory at the 5 kilometre point and her move was to prove decisive as she was never in danger of being caught in the closing stages.

The Frenchwoman's best previous finish at the championships was sixth two years ago.

Steel picked up another silver after her second place behind Britton in Velenje and Britain won the team title ahead of France and Spain.

The Irish women picked up a surprise team gold 12 months ago but their weakened line-up had to settle for sixth this year with the other finishers Sara Treacy (31st), Ciara Durkan (36th), Sarah Mulligan (44th), Ann Marie Larkin (49th) and Maria McCambridge (55th).

Paul Robinson and Sean Tobin earned ninth places in the men's under-23 and junior races.