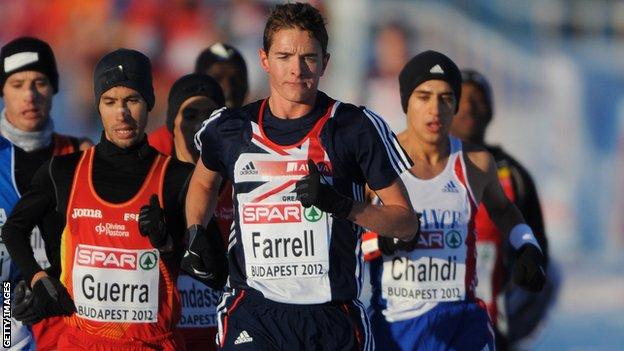 Cumbria's Tom Farrell says missing out on London 2012 because of injury has "not hampered, but motivated" him.

Carlisle's Farrell is the 10th fastest British 5000m runner in history. The man three places above him in the all-time rankings is Barrow-born London Olympian Chris Thompson.

Last summer, despite racing in the Payton Jordan invitational held in California, the pair finished almost side-by-side as they achieved the Olympic 'A' standard.

In Serbia this Sunday, the 22-year-old races at the European Cross Country Championships - last year

"In my mind I'd done the hard bit and run 13.15. It was hugely disappointing but it drove me on," he told BBC Sport.

Despite remaining eligible for that age group, British Athletics have as they did last year.

Tom Farrell is hoping to run for England at next summer's Commonwealth Games in Glasgow.

If he does, it will come 28 years after his mother Jennifer competed in the high jump for England in Edinburgh's Commonwealth Games.

Currently at university in the United States, Farrell missed the trial race for both the 2012 and 2013 European Cross Country.

"Last year I was only given the option of the senior race as the criteria stated they would pick the first six under-23s in the trial and no one else," he explained.

"This year, I was just put in the senior race and I'm fine with that.

"I felt like I was running under no pressure last year. I was bouncing back to running well and by then the injury had motivated rather than hampered me.

"To then win my first individual medal for Great Britain the following summer was an incredibly proud moment, hopefully I can build on that."