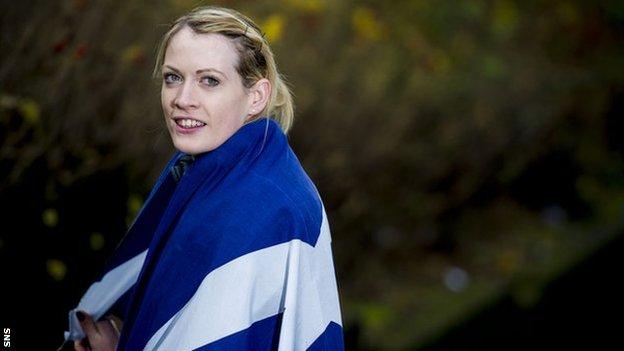 A Scottish team will be making its debut in the first major event in Glasgow in 2014 ahead of the Commonwealth Games.

They will compete against Great Britain & Northern Ireland, USA and a Commonwealth select.

"It was a complete surprise to me.

Child, who won silver in the 400m hurdles at the 2010 Commonwealth Games in Delhi, added: "It's obviously going to be a big year for Scotland with the Commonwealths.

"Hopefully I can do them proud when it comes to the championships.

"It's good for the athletes who maybe might not get as many opportunities to run for GB but will get a chance for Scotland.

"And it's good for the crowd to come out and see the athletes, who they might not know, in Glasgow.

"When it comes to the Commonwealths they will know who they are going to be supporting. It really gets morale up for the team.

"People always get behind all the athletes, so to have that opportunity to go out there and show what we can do with a huge crowd behind us will be incredible."

The full Scottish team has yet to be announced, but Child, who will run in the 400m, will be joined by European Under-23 1500m bronze medallist Laura Muir, who will line up in the 800m.

Chris O'Hare will return from the United States to compete in the 1500m, while Jamie Bowie will run in the 400m.

Guy Learmonth will take to the track in the rarely run 600m with the aim of breaking the Scottish record set by David Jenkins 40 years ago.

For the first time in the match's 23-year history para-athletes will take part and Scotland's Libby Clegg and Stef Reid will compete at the Emirates Arena.

Clegg will line up alongside guide runner Mikail Huggins in the T12 60m after winning double silver at the IPC World Championships, while Reid will compete in the F44 long jump with the aim of replicating the form that led to a silver medal at last year's Olympics in London.