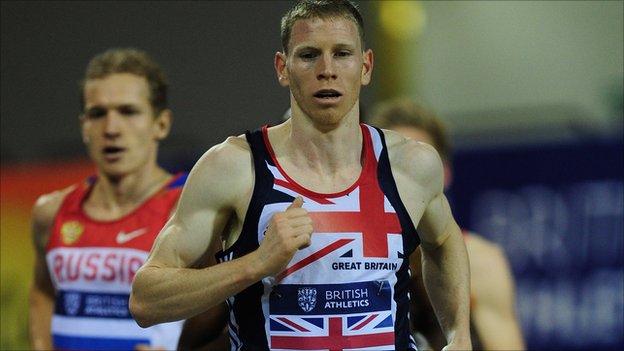 Great Britain number one Andy Vernon believes a medal at this weekend's European Cross Country Championships in Belgrade is a "realistic target".

Vernon, 27, won at the GB trials in Liverpool a fortnight ago and is leading the British team to Serbia.

And at the very least the Hampshire athlete, who is now based in West London, hopes to improve on his 13th-place finish in Budapest last year.

Vernon, who came fourth at the Great South Run in October, added: "There are about six guys in the race who on their day could get a medal. I've pin pointed six guys who are a danger and that includes myself.

"[Fellow GB athlete] Tom Farrell finished fourth last year and is a threat so Great Britain have got a good chance of a medal.

"It just depends how the race unfolds on the day."

Vernon, who helps fund his athletics career by baby sitting, will then turn his attentions to the Commonwealth Games in Glasgow next year.

"In Glasgow I'll be targeting 5k on the track," he said. "At the European Championships I'd like to do the 10k."

A number of Vernon's club mates from Aldershot, Farnham & District are also on the British team heading to Belgrade.

They include GB debutant Jess Andrews who will race in the Under-23 event.

Andrews, 21, hails from Shanklin on the Isle of Wight, said: "It's the most exciting week I've had in my athletics career so far.

"I'm shocked I have made it to the team.

"I cannot explain my excitement in words. I went into the trials thinking I could make the team, I felt really good and went for it and it all came together and I made it into the top four."

"All I can do is relax and run my race. I know I am in good shape and hopefully as a team we can do well and get on the podium."