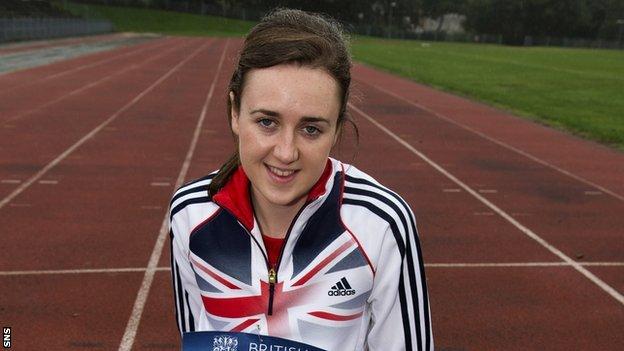 Laura Muir won the Scottish Short Course Cross-Country Championship in Glasgow ahead of the European Cross trial in Liverpool in two weeks' time.

The World Championships 800m semi-finalist sped across the frost and mud in Bellahouston Park over 4km to beat Morag MacLarty of Central AC and the reigning champion Rhona Auckland.

"I was a wee bit nervous about this one because Rhona is an excellent cross-country runner," said Muir.

"She has beaten me the last few times."

Muir now turns her attention to the European trials in Liverpool, which are run over 8.1km.

She added: "I am sure I will be ready for that one and it will be good to measure myself in GB terms over cross country."

While MacLarty had to settle for silver, her male Central AC team-mates took the first four places in the men's race over 4km.

Alistair Hay won by six seconds from Robert Russell and Andrew Buthcart, while fourth-placed Cameron Boyek took the men's Under-20 title, while VP-Glasgow's Danielle Beattie collected that honour in the women's race.

The event attracted a record entry which organisers scottishathletics say is a response to "an upsurge in interest post London 2012 and ahead of the Commonwealth Games".

In the Under-17 age group there were title wins for Gillian Black (VP-Glasgow) and Jonathan Glen (Inverclyde) with the Under-15 golds claimed by Ben Greenwood (Perth Strathtay) and Erin Wallace (Giffnock North).