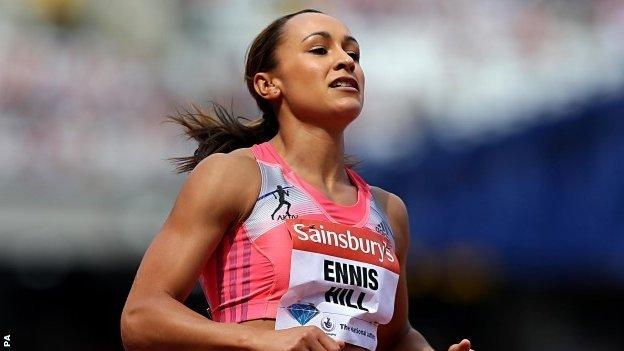 Jessica Ennis-Hill says she hopes to make her competitive return from injury during next year's indoor season before going for her first Commonwealth gold.

The 27-year-old has struggled with an Achilles problem ever since winning the Olympic heptathlon title in 2012 and the injury forced her to miss August's World Championships in Moscow.

"I hope to do an indoor season and then do a heptathlon and individual events," the English athlete told BBC Sport.

"The ankle is on the mend."

She added: "I wasn't ready for the Worlds. I'm now undergoing a rehab programme. It's healing and getting back to full strength.

"I'm working on getting my Achilles right, so I can be right for Commonwealth Games."

"It was difficult to sit at home to watch the championships without me," she added.

"It was a great event, but one with a low score. It would have been great to be there and win the title.

"Katarina is a great heptathlete. She's going to come on each year and is definitely one to watch in the future."