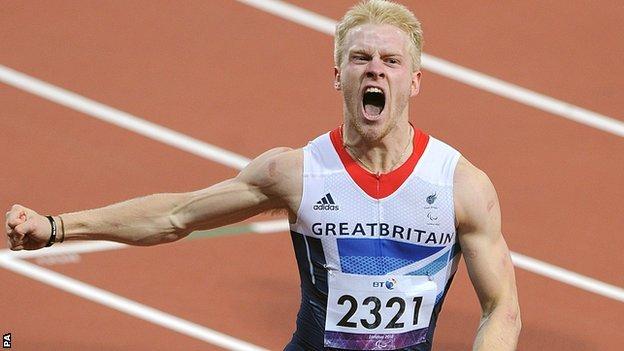 Paralympic gold medallist Jonnie Peacock has repeated his call for the Diamond League to include more disability events at its meetings.

This weekend's Great North CityGames includes Paralympic events, as did the Manchester CityGames in May.

"The Diamond League needs to stop being so cloth-eared and realise what is out there and open the door," said Peacock.

"We had the Manchester CityGames, which was probably my favourite race this year, and now the Newcastle CityGames.

"So it's a chance to have a Paralympic event stuck in an able-bodied programme, which is awesome, shows it works and people will come and turn up for it."

However, he is keen for the inclusion of disability events not to be a token gesture.

"What I want to see is Paralympic events being put in there but at the same time be shown off properly.

"There was a couple [at the Diamond League meet] in Brussels which was fantastic and it is a huge step forward to see that - but then I was watching on TV and they did not show one clip of the race.

"If you are going to put them in there, do it properly. It's not just a cheerleading event, it's in there for a reason - put it on the TV."

As well as Peacock in the T43/44 100m, Saturday's Great North CityGames stars will include London 2012 champion Christine Ohuruogu in the 150m, and James Dasaolu - the second fastest Briton of all time - in the 100m.