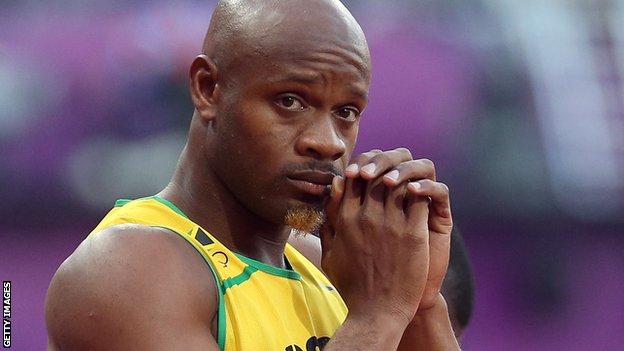 Asafa Powell is among five Jamaican athletes whose B samples have shown an "adverse analytical finding" after they failed drugs tests in June.

The Jamaica Anti-Doping Commission said the B samples were tested in Canada.

The findings will now go before an independent body for further consideration prior to disciplinary hearings.

It said those results "confirmed the prohibited substances which were identified in the A sample analyses for the five athletes who were tested at the National Junior and Senior Championships in June 2013".

"All athletes have been notified and have acknowledged receipt of their Notification Letters of an Adverse Analytical Finding for a B Sample," it continued.

"Jadco has therefore referred these findings to the independent Jamaica Anti-Doping Disciplinary Panel for their consideration and establishment of the Hearing Panels."

Powell and Simpson's manager, Paul Doyle, has pointed the finger of blame for their failed tests at their trainer, Canadian Chris Xuereb, who only began working with the sprinters in May.

Xuereb denies responsibility and says he is being made a scapegoat.

Powell's initial failed drugs test became public on 14 July, the same day the United States' Tyson Gay, the fastest man in the world this year in the 100m, admitted he had also tested positive for a banned substance.