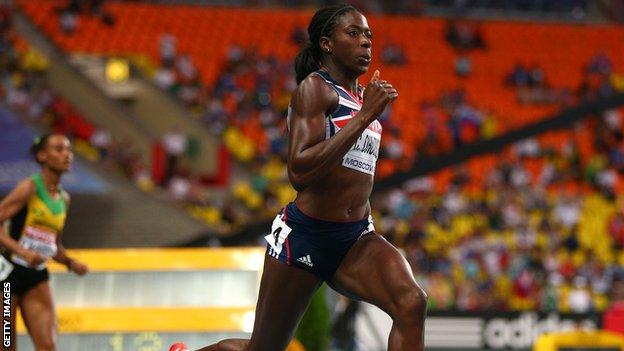 Britain's world 400m champion Christine Ohuruogu returns to the track for the first time since her Moscow triumph when she competes in the final Diamond League meeting of the season on Friday.

The 29-year-old's opponents at the meet in Brussels include Botswana's Amantle Montsho - the woman she beat in a photo finish to clinch gold last month.

Tiffany Porter also competes for the first time since winning bronze in the 100m hurdles for Britain in Moscow.

World and Olympic champion Bolt, 27, faces five other 100m finalists from the World Championships, including Justin Gatlin and Nesta Carter, who won silver and bronze respectively.

Britain's 25-year-old James Dasaolu, who set a personal best of 9.91 seconds at the British Championships in July, also competes in the 100m in Belgium.

The climax to this season's Diamond League, which started in Qatar in May, features a number of other British athletes.

Chris Clarke and James Ellington compete in the 200m, while world and Olympic 800m finalist Andrew Osagie, 25, is also in action.

And following a fourth-place finish in the 1500m in Moscow, 26-year-old Hannah England faces the three women who finished in front of her - Abeba Aregawi, Jenny Simpson and Hellen Obiri.