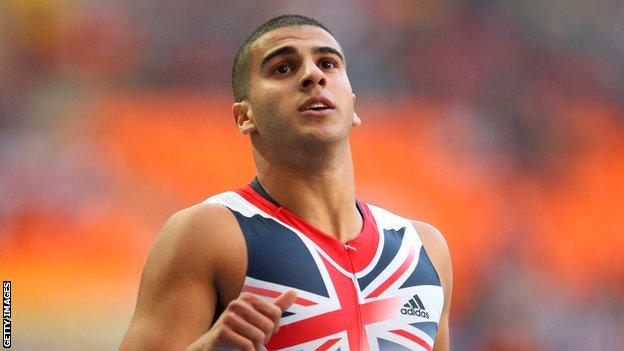 Jamaica's Olympic champion Usain Bolt has backed British sprinter Adam Gemili for success, as long as he is given space to develop.

Gemili, 19, blamed a poor start in Thursday's Diamond League meeting in Zurich for his failure to break the 10-second barrier in the 100m.

"It is so long since Great Britain has had an exciting young sprinter like this, coming through and coping at the highest level.

"He ran under pressure on Thursday in a red hot field towards the end of a very busy season.

"Usain Bolt has said he will be departing the scene after the Rio Olympics in 2016, so the field will be much more wide open then. At that stage, Gemili will be just 22- years-old."

If he had done that, he would have become the first Briton to also have run under 20 seconds in the 200m.

Gemili, who finished eighth in Zurich in a season's best time of 10.06 seconds, has enjoyed an epic rise since deciding to concentrate on athletics full time in January 2012 and abandon a career as a lower league footballer.

Last summer, he became the fastest British junior of all time as he won gold in the World Junior Championships 100m in 10.05 seconds - a time that remains his personal best.

The Blackheath and Bromley Harriers star then narrowly missed out on a place in the final of the same event at the Olympics in London.

After winning 100m gold at the European Athletics Under-23 Championships in Finland this July, he marked his first appearance in a major final by finishing fifth in the 200m at this month's World Championships in Moscow.

In the semi-final his time of 19.98s saw him become the second fastest Briton of all time over that distance, behind only John Regis, who clocked 19.87 seconds in Italy in 1994.

Bolt warned of the dangers of placing too many expectations on Gemili, despite the impressive start to his career.

"With younger athletes, the biggest thing is when people pressure them too much," said Bolt. "If you try to put too much pressure on these athletes, they cannot handle it.