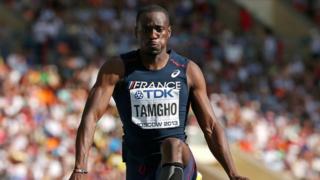 Teddy Tamgho becomes only the third man in history to triple jump over 18 metres but falls short of the world record held by BBC Sport pundit Jonathan Edwards during the World Athletics Championships in Moscow.

The Frenchman won gold but had his sight set on the record of 18.29m that has stood since 1995.

He achieved a personal best effort of 18.04m to win his first World Championship title.